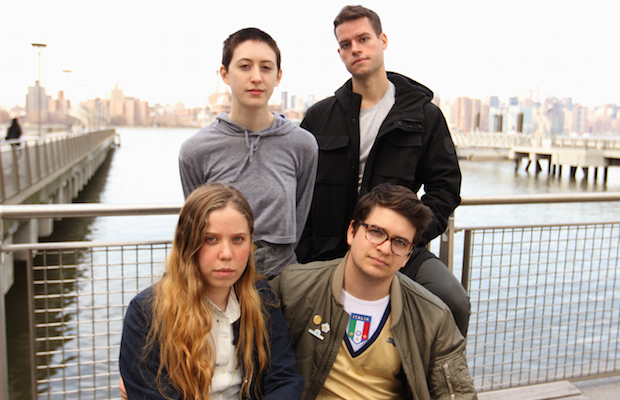 What began as something of a solo alias and has since morphed into the moniker for a permeant band, Frankie Cosmos is the brainchild of New York singer-songwriter Greta Kline, who also previously made music as Ingrid Superstar. The daughter of actors Kevin Kline and Phoebe Cates, Kline’s sound draws inspiration from New York’s famous anti-folk scene, and is informed by the contemporary arts community of the city, as well as the pockets of diverse musicians that surround it. Though she’s been prolifically releasing self-recorded collections of songs for several years, exploring elements of indie rock, indie folk, and lo-fi pop, Greta debuted her most concentrated, full band, label-backed effort Zentropy in 2014, igniting a wave of buzz and increasingly frequent touring, and leading to two well-received followups, 2016’s Next Thing, and this year’s Vessel.

For their largest local headliner to date, Frankie Cosmos are set to perform tonight, May 9 at The Basement East, along with the well-matched Florist and Lala Lala. Like all of May, it’s a busy night of shows, but if you’re craving some excellent indie, lo-fi, and punk rock, you can’t go wrong with this one. Grab your tickets here while they last.

Hailing from  Brooklyn and self-descried as “a friendship project,” Florist play a kind of lo-fi, minimalist, folk informed pop that builds from the same influences as Frankie Cosmos. Since finding acclaim for their 2016 debut, The Birds Outside Sang, the band have continued to rise in recognition, and last year’s followup, If Blue Could Be Happiness, was without a doubt one of 2017’s coolest under the radar releases.

And finally, Chicago indie punks Lala Lala play a grungy, poppy style that compliments the rest of the lineup with a more raw, lo-fi bent, while also landing a bit more on the rock end of the spectrum. Their latest LP, Sleepyhead, arrived in 2016, and new music seems inevitable in the near future. Yet again, this is a show you want to catch every minute of.

Frankie Cosmos, Florist, and Lala Lala will perform tonight, May 9 at The Basement East. The show is 18+, begins at 8 p.m. (doors at 7 p.m.), and tickets are available to purchase for $17.