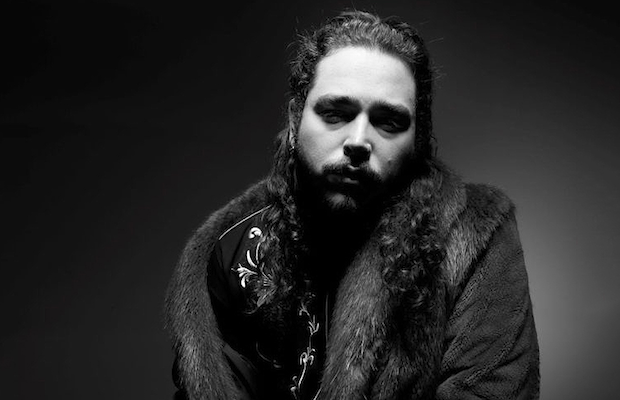 Love him or hate him, there’s no escaping the huge orbit or unlikely hip hop superstar Past Malone. To say he’s currently having a moment would be an understatement- Malone is everywhere right now, smashing chart records, permeating the pop culture, and appearing at prominent events like a primo Coachella set right before Beyoncé. Born Austin Post, the 22 year old Texas native informed his eclectic sound by absorbing rock, country, and rap as a kid, learning guitar and cutting his teeth in metal bands, while simultaneously working on early, experimental mixtapes.

After moving to LA, Post feel in with the right musical crowd, and released breakout single “White Iverson,” which landed him a major label record deal and on the radar with huge talents like Kanye West. Though his debut LP, 2016’s Stoney, now certified double platinum, laid the groundwork in making Malone a household name, it’s more recent hits “Rockstar,” “Psycho,” and “Better Now,” all from his brand new effort beerbongs & bentleys, that have proven his enduring, superstar staying power.

Just months after a Nashville debut at Marathon Music Works (and weeks after a secret “dive bar” show at Exit/In), Post returns tonight, May 8 for an appropriately massive headliner at Nashville Municipal Auditorium, co-headlined by fellow modern hip hop star 21 Savage, with support from kindred spirits SOB X RBE and Paris. Only a limited numbers of tickets remain, but as of writing you can still snag ’em here, if rowdy, young, anarchistic, and wild internet-bred hip hop is your cup of tea.

Though he’s been kicking around the mainstream radar just a hair longer than Post Malone, rapper 21 Savage has similar experienced a huge recent wave of broader attention, partially due to his feature on Malone’s biggest hit, “Rockstar.” The Atlanta based MC, who has ties to fellow breakout act Migos, released both a collaborative effort and his debut LP, Issa Album, last year, and though similar modern, internet-bred approach, tends to stay more conventionally in the hip hop lane than Malone’s weirder, more genre-bending sound.

Holding it down with support, Bay Arena newcomers SOB X RBE only recently sprung to national attention with a contribution to Kendrick Lamar’s curated Black Panther soundtrack. The group’s full-length debut, Gangin, dropped just a few months ago, but with its hard-hitting energy and musical depth, is already drumming up high praise. And opening things up, LA’s Paris might be the closest in style to Post Malone. With only a handful of singles so far, he lands with a sound similar to other popular Soundcloud-born, rock raised crossover talents like Lil Peep, and is definitely someone you should have an eye on.

Post Malone, 21 Savage, SOB X RBE, and Paris will perform tonight, May 8 at Nashville Municipal Auditorium. The show is all ages, begins at 8 p.m., and tickets are available to purchase for $53-144.50.