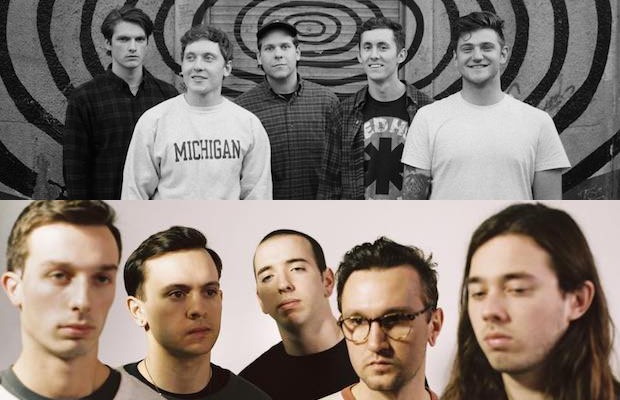 Two acts that should be pretty familiar to regular readers, Basement and Citizen, are brining their co-headlinig tour to The Basement East tonight, May 8 with buzzy up and comers pronoun and Souveniers– a must-see show for fans of punk, emo, indie, post-punk, and alt rock. All unique in their own interpretations and subsets of their respective corners of genre, all four of these acts, from the more established headliners to the promising rising support, are absolutely phenomenal, and you can still grab tickets to see them right here!

Seemingly just as they hit their stride, following the release of their critically beloved, unbelievable 2012 effort Colourmeinkindness, English alt/punk rockers Basement broke up, leaving us (and much of the planet) mourning their premature demise. Just over a year later, however, the band began hinting of a return, and soon prominently began to tour once more, giving way to an excellent new LP, Promise Everything, in 2016. Pulling influence from melodic hardcore, ’90s emo, alternative rock, and punk, Basement’s sound is unparalleled, a perfect homogenization of the best parts of multiple styles, and their thematic focus, delivery, and presentation puts them leagues ahead of most of their peers, transcendent of the scene that surrounds them. They’ve been to Nashville several times as a supporting act in recent years, but seeing them at top billing should be a special treat.

Hailing from Michigan and Ohio, Citizen are part of that new wave of up and coming emo-infused, poppy, indie punk groups we love to rave about. Though they started out as more of a pop punk band, Citizen quickly found inspiration from grunge, post-hardcore, and, of course, emo and indie rock, captivating the scene with their impossibly strong debut, Youth. The dynamic, road-worn rockers further built on that sound with 2015’s stellar Everybody Is Going to Heaven, a more somber, personal, and introspective effort, and just last fall unleashed their latest, As You Please, reaching ambitious, raw, earnest, and aggressive new heights. Though no stranger to Music City, any time they come through is a must-see.

The musical vehicle of Brooklyn’s Alyse Vellturo, pronoun made a strong debut in 2016 with her stellar EP There’s No One New Around You, and recently returned with a new single, “run,” that we’re currently obsessed with. With a punk rooted base and anthemic, indie pop sensibilities not unlike older Tegan and Sara, Vellturo’s hypnotic sound is fast making her a must-know artist.  Similarly, openers Souvenirs are a fast rising fixture in the scene. Hailing from California, the group channel ’90s emo and classic indie rock to land on their moody, layered, and melancholy sound. This lineup is stacked with talent from top to bottom, so you definitely want to make a point to be punctual.

Basement, Citizen, pronoun, and Souvenirs will perform tonight, May 8 at The Basement East. The show is 18+, begins at 7 p.m. (doors at 6 p.m.), and tickets are available to purchase for $23.