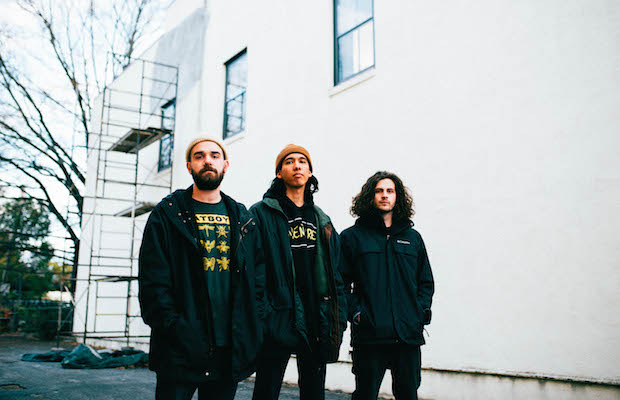 Formed in North Carolina (though they appear now to be at least partially based in Chattanooga), Sinai Vessel began largely as a singular vehicle for frontman Caleb Cordes, who crafted the project’s excellent 2014 debut EP, Profanity, with the help of a rotating cast of other performers. Following the record’s release, and after a steady stream of underground buzz, Cordes tapped two former high school classmates, drummer Joshua Herron and bassist Daniel Hernandez, to fill out what would become the band’s solidified lineup, and, over the course of a few years, a false start (in which they recorded an album entirely, only to scrap it and start over back home), and a more unified and nuanced artistic direction, crafted the group’s debut album and most wholly-representative release to date, last year’s phenomenal Brokenlegged.

Pulling largely in influence from the beloved and substantive emo and indie era of the late ’90s and early to mid-’00s, Sinai Vessel forge a smart, approachable, literary, earnest, and resonant sound which lands them among the most promising of emo’s new wave of acts, attracting attention not just from within the scene, but from tastemaking outlets like Pitchfork and The A.V. Club. With fairly frequent stops in Nashville over the past few years, the band have long been on our radar, and tonight, April 15, they return for a headlining outing at punk house space That 70’s House– easily the best under the radar happening of the weekend.

Sinai Vessel alone would be worth checking out, but this show is also stacked with some of our favorite acts in the flourishing local indie, emo, post-rock, and punk scene. For just $5 (which averages out to $1 per band), you get the lush, ethereal, indie sounds of Bandit, indie/emo faves Slow and Steady, for their first full band show since new EP It’s Alright, whose Pedro the Lion-esque sound lands very similar to Sinai Vessel, ambient/indie rockers The Still, Small Voice (whose creative core Christiana Benton will soon be relocating from Nashville), and Americana-tinged punk group Smallville. That’s a seriously impressive lineup from top to bottom, and for just a few bucks, it’s impossible to beat.

Remember, That 70’s House is a DIY space (you’ll need to ask around for the address), so be respectful of the home, keep the scene safe, and just generally don’t be a dick. We’re lucky to have spaces in Nashville to host shows like this, but it’s up to all of us who care about that side of the scene to help preserve them.

Sinai Vessel, Bandit, Slow and Steady, The Still, Small Voice, and Smallville will perform tonight, April 15 at That 70’s House. The show is all ages, begins at 7 p.m., and you can pay a $5 donation for the bands at the door.

Watch Jack White Perform "Over and Over and Over," "Connected By Love," Appear in Unaired Sketch on 'SNL'