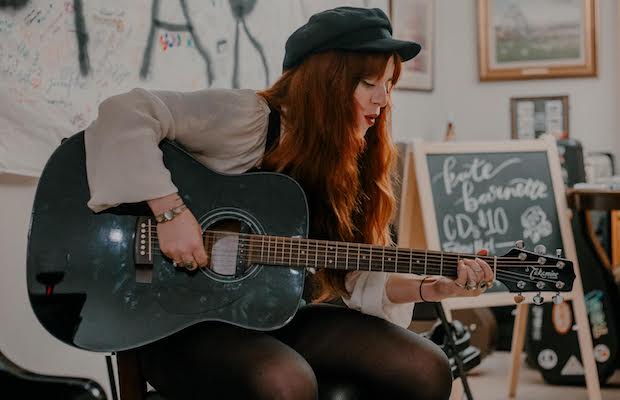 Psychedelic blues pop singer Kim Logan has long been a fixture in the local scene as well as a favorite of ours ever since the release of her self-titled debut LP in 2013. Adopting a bit more of an unconventional approach for her followup, Kim has, for more than a year, been releasing new music in mini installments dubbed Pseudoscience.

While Chapters 1 and 2 dropped in late 2016, Logan took a bit of a detour early last year, teaming up with The Hydramatic from her native Florida to flex her range with a soulful, r&b leaning EP called Fresh Juice. Last fall saw Kim return to her Pseudoscience series, however, with an inspired Chapter 3, fueled by a certifiable local supergroup.

Recorded to tape at Turkish Laundromat Studios by Gyasi Heus, the lineup for the release includes Kim, Heus, Dylan Whitlow (Blackfoot Gypsies), Amaia Agirre (Thelma and the Sleaze), and Houston Mathews (Buffalo Clover, The Minks). A-side “Ladyboy” just received well-deserved music video treatment from Michael Alley, which Logan describes as “pure homage to the 1970s New York City sounds and fashion that has been the zeitgeist for nearly 50 years”

Elaborating on the new spot and the inspiration for the her latest release, Kim says “Ladyboy” is “caught at a unique intersection of the history of rock and roll, the present of Americana fetishisation, and the mystery of the future of music,” explaining the she “has loved and worked with some of the most beautiful, fearless, creative, androgynous souls in Nashville. ‘Pseudoscience: Chapter 3’ is for and about them.”

You can watch Logan’s new video for “Ladyboy” below, and you can see her live March 24, for an intimate SoFar Sounds show at a secret location in The Nations- details here!