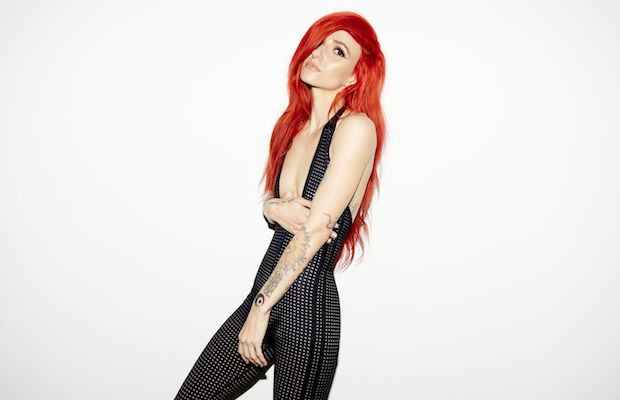 Returning to town for a headlining run in support of her inspired, conceptual, multi-media spanning 2017 fourth full-length Skin & Earth, Canadian electropop singer Lights is slated to bring her stellar live show to Mercy Lounge on Feb. 19. Though she just passed through with PVRIS late last year, the unabashedly nerdy-chic singer turned comic book author is even more epic and transcendent as a top-line act, and this time around she’s bringing along rising alt-pop Australian trio Chase Atlantic and Canadian party pop singer DCF, for a night of synths, bangers, and dance-primed jams. Tickets to this must-see show are still available here, but we’re excited to announce that we’re also giving away a pair of tickets to one lucky fan! Read on for more about all three acts, and enter for a chance to win below.

Though she claims Toronto as her home base, Lights (that’s really her legal name these days, though she was born Valerie Poxleitner) was raised by missionaries, moving around through various corners of the world. Gravitating towards playing in bands at a young age, Lights developed her signature synth-heavy pop sound in the mid-’00s, largely a DIY writing effort, finding swift and significant success with her self-titled debut EP and subsequent LP, The Listening. With even more acclaim and award recognition in her native Canada, the singer connected with the punk community in the U.S., nabbing an early spot on Warped Tour and gaining further attention with a national ad campaign with Old Navy. Though her debut is a near-perfect pop album, later releases would incorporate both more conventional instrumentation and broader EDM, hip hop, and dubstep-dervived influences, helping Lights connect with a wider and even more eclectic audience. Through years of touring with a wide array of acts, she’s developed an unbelievable live show to match, boasting a full backing band, light show, tons of synths, and incredibly polished performance chops. With last year’s fourth album, Skin & Earth, her most ambitious to date, the singer also incorporated her love of comic books, crafting a full-on concept album and broadening her medium with a great tie-in comic series that she wrote and illustrated herself, going so far as to transform herself into the visual embodiment of her comic counterpart for this release cycle. Though she’s seen plenty of success, it still feels like Lights is a criminally underrated artist, and one who should be dominating the pop landscape at a mainstream level- until that day comes though, seeing her in more intimate spaces like Mercy Lounge is always a next-level experience.

Made up of brothers Mitchel and Clinton Cave and longtime friend Christian Anthony, Australian dark alt-pop/r&b trio Chase Atlantic have been building buzz for a few years now, finding breakout success across the native continent and earning praise throughout the blogosphere with a series of strong, independent early EPs. After first catching the eye of the Madden Brothers (of Good Charlotte fame) then subsequently inking a deal with Warner Bros., the band dropped their eponymous debut full-length last year, and have been fast becoming a global fixture ever since, with 2018 looking to be a transformative year, including summer stops at the likes of Bonnaroo and Firefly after their extensive tour with Lights. With their stylish, modern, electro-laced, and genre-bending style, Chase Atlantic feel like a perfect compliment to this bill and a very exciting act to catch on the rise.

Like Lights, a native of Toronto, DCF is the live alias of rising neo-pop singer David Charles Fischer. Since first springing onto the scene with 2014 EP Pop Songs, the young artist has managed to amass a growing underground following while cultivating a party-primed, honest, and ironic “bad boy next door” persona, which lands as something like a Justin Timberlake for the Soundcloud generation. Fischer’s style and vibe is a total blast and he feels like an artist that could totally blow up overnight, so show up early and see what he’s all about!

Winner will be announced Tuesday, Feb. 13 at 2 p.m. CST, and will receive one pair of tickets. Good luck!