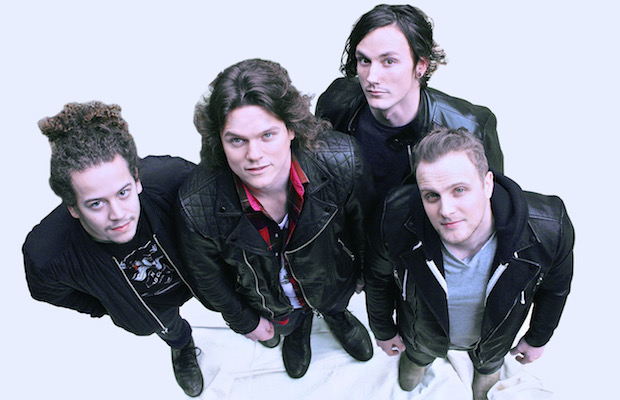 What began as a one man band project for frontman Johnny Lucas in his native UK, local newcomers Lucas are the product of their titular bandleader’s desire to flesh out his sound to a full band format (despite being quite adept at performing alone with loop pedals, even earning praise from none other than Jimmy Page for his live efforts). Following a series of solo EPs, frequent UK performances, attention from prominent British radio and press, and appearances at the Glastonbury and Isle of Wight Festivals, Johnny relocated to Nashville and formed the band, aiming to tackle the U.S. market with a forthcoming debut EP under the Lucas moniker.

An exciting addition to the local rock scene, Lucas worked with former Cage the Elephant guitarist turned co-writer and producer Lincoln Parish on their upcoming EP, High Wire, which continues to channel Johnny’s love of ’60s rock and contemporary Britpop, packed with “raucous guitars, sticky melodies, sly lyrics and anthemic choruses.” We’re thrilled to introduce you to this exciting group with a premiere of title track “High Wire,” which, with its hook-laden, soaring melodies and pop-accessible instrumentation, blurs the line between pop and alternative, feeling both timeless and fresh, and primed to get stuck in your head all day.

“High Wire” officially arrives tomorrow (along with another new tune, “Got It Together”), and you can expect an EP of the same name this summer, with more music soon to follow, as Lucas have already begun writing for their next release. Hit play below to stream it early, and if you like what you hear, get to The 5 Spot this Friday, Jan. 26, to catch Lucas live along with Pet Envy and J. Marco. The 21+ show will run you just $5, and kicks off at 9 p.m., so don’t be late!