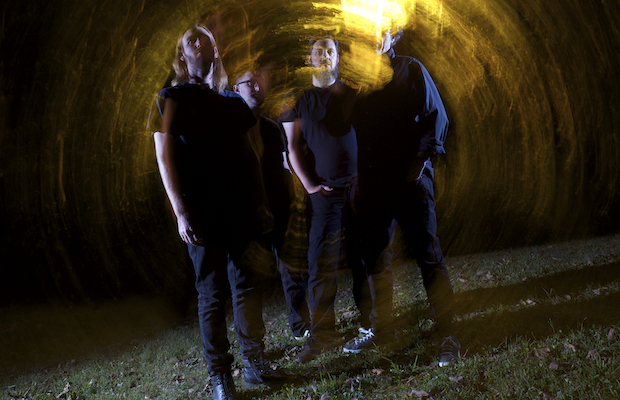 Shoegaze rockers Tape Deck Mountain have been bounding around the local music scene since 2015, but the story of founder and frontman Travis Trevisan dates back a decade when he released the group’s debut EP in 2008. Fast forward to today, and the band have moved on from San Diego, and moved on again from Brooklyn, to land in Nashville with a fresh lineup and new outlook on their craft of creating their tasty brand of soaring, reverb drenched shoegaze rock that we hear on their forthcoming third LP Echo Chamber Blues, which was recorded in town at Phantom Center.

In what is a common musical theme following the 2016 election, the new record lyrically addresses the current political and religious climate. In latest single “Elephant,” which we are thrilled to premiere for you today, Trevisan tells the story of its creation, “‘Elephant’ was written rather quickly, influenced by some new effects pedals and the presidential election. The phrasing and lyrical content has a nice duality and are mostly commenting and questioning the strange bedfellows of politics and religion.”

The album officially drops on Feb. 23, but you can get a taste of what to expect with our exclusive premiere of “Elephant” below.  You can also dig into the rest of the already release singles through their Bandcamp page.

Catch Tape Deck Mountain tonight, Jan. 17 at Mercy Lounge with likeminded Dallas based rockers True Widow and local faves Idle Bloom. The show starts at 8 p.m. (doors at 7 p.m.), is 18+, and tickets are $12.