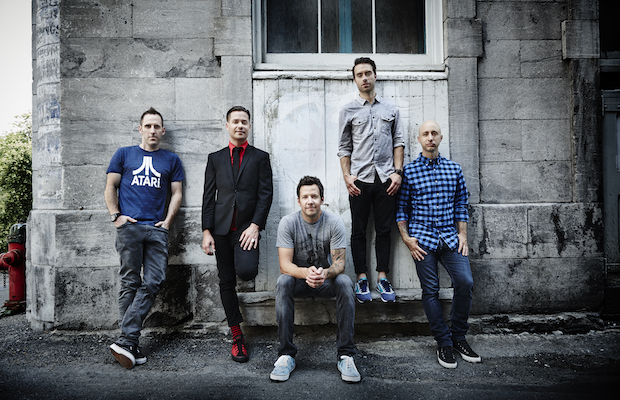 15 years ago, Canadian pop punks Simple Plan erupted to international fame, thanks to their infectiously catchy and well-timed debut, No Pads, No Helmets…Just Balls, which hit right at the moment pop punk was about to become the dominant force in rock for a few years (thanks to the breakout success of acts like Blink-182, Green Day, Sum 41, Good Charlotte, New Found Glory, and, a bit later, Fall Out Boy and Paramore). The band have continued to maintain respectable success and release new music, four more albums in total, maturing along the way, but that first LP, a perfect snapshot of sophomoric pop punk angst and carefree quest to never grow up, has remained a fan favorite, with enduring singles like “Perfect,” “I’d Do Anything,” “I’m Just a Kid,” and “Addicted,” which is why the group opted to hit the road for its anniversary, where they’re playing the album in full (followed by an encore of later work).

The anniversary run hits Nashville tonight, Dec. 2 for at stop at Cannery Ballroom with support from fellow ’00s pop punk faves Hit the Lights and Patent Pending, and very few tickets remain, so if you have any urge to scratch that nostalgia itch, and throw it back to the good old days of 2002, you’d better act fast. Best we can tell, this is Simple Plan’s first stop in Music City in years, if not ever (though they almost certainly passed through on Warped Tour or a forgotten club show back in the day, we can’t find any documentation of it), and since it’s all ages, it’s a rare chance for fans young and old to see the group perform their most famous work from front to back. Don’t miss out!

Simple Plan, Hit the Lights, and Patent Pending will perform tonight, Dec. 2 at Cannery Ballroom. The show is all ages, begins at 7 p.m. (doors at 6 p.m.), and tickets are available to purchase for $28.