[NO COUNTRY PREMIERE] The Subnovas Return with Apocalyptic “I Cannot Stop” Ahead of Debut LP, Comic Book 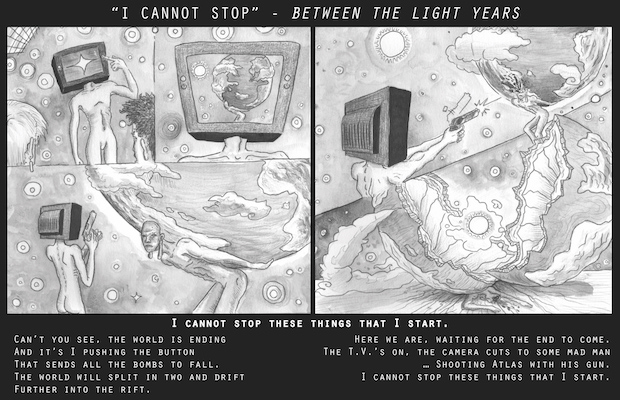 Aside from the surprise unearthing of an unreleased track earlier this year, we haven’t heard much from local rockers The Subnovas since 2014. That’ll change in a big way this winter, when the genre-bending post-rock group, whose conceptual and eclectic sound pulls from post-punk, art rock, psychedelic pop, and beyond, release their first ever full-length, Between the Light Years, an ambitious, apocalyptic, existential, and cosmic effort that will receive an accompanying sci-fi comic book of the same name.

Before the LP and comic arrive, however, The Subnovas are kicking things off with a first single, “I Cannot Stop,” and we’re incredibly thrilled to bring you an exclusive first listen ahead of its official release this Friday. “This song comes from a place of sardonic satire when looking deeply at the socio-political landscape that we inhabit, especially in America where ideas are bought and sold to the highest bidder with hardly more than a cynical regard for pursuits of truth, virtue, and beauty,” says frontman Michael Taylor, on the track’s inception.

Explaining the the comic and album “are not meant to be completely dependent halves of each other; they should be seen with the same relation as your waking life has to the existence of your dreams,” Taylor describes the book as “my own uncovering of visions fraught with the desolation of all I understand to exist, a dreamscape both at once bleak and hopeful.” You can see a preview in the panels above, which bring to life the new single, illustrating the destruction of the earth at the hands of a mad man.

While we wait for the ambitious, self-produced, multimedia effort to arrive, hear “I Cannot Stop” in all of its dark, synthy, layered glory. And be sure to catch The Subnovas live this Friday, Oct. 27 at The East Room, where they’ll celebrate the single’s release at The East Room for a pre-Halloween “Dead Party,” also featuring Tayls (performing Gorillaz), Spaceface (featuring members of The Flaming Lips), and TWEN. Grab tickets here!

HalfNoise to Play The End Nov. 16