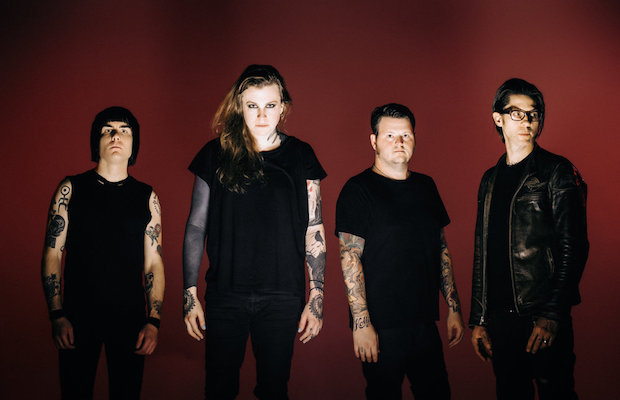 Though they’ve circled around us in nearby cities and festival spots, seminal Florida-bred punks Against Me! haven’t played Nashville proper in about three years. That changes tonight, Oct. 20, when the group, still buzzing from last year’s excellent new LP Shape Shift with Me, return to headline Cannery Ballroom, with support from buzzy LA punks Bleached and Canadian alt rock trio The Dirty Nil, a stellar trio of acts and perhaps the weekend’s most exciting bill from top to bottom. Longtime readers have surely seen us obsess over AM! in the past, but we can’t overstate their importance in the modern punk, musical, and social landscape, and live, they’re an epic and unrivaled force. Tickets are still available here, but they might not last, so read on if you need some extra convincing then secure your spot!

Fresh off a run of arena dates earlier this year supporting Green Day (during which we snuck to Memphis to catch an amazingly intimate off-day show), and after a lengthy international tour, seminal punk outfit Against Me! show no signs of slowing down, following the release of their fantastic seventh full-length, Shape Shift With Me, last fall. As we noted ahead of their recent Memphis date, the band haven’t played Music City proper since both a headlining and co-headling show in 2014, and, while we also got a chance to see them at Forecastle in 2014, Bonnaroo in 2015, and Shaky Knees in 2016, we’ve been holding out for an inevitable Nashville return.

Formed in Florida in the late ’90s, Against Me!’s homegrown punk sound, anarchist ideals, and raw and aggressive performance style helped them quickly find an audience in their local scene. By the early ’00s, they were releasing full-lengths on popular indie punk labels like No Idea Records and Fat Mike’s Fat Wreck Chords, amassing enough critical and commercial success to begin touring the world, and eventually catching the eye of Warner Bros. subsidiary Sire Records. Their Butch Vig produced major label debut, 2007’s New Wave, took a poppier, glossier turn, polarizing some fans but generally helping catapult the band to a wider audience and earning near unanimous praise from critics.

Since frontwoman Laura Jane Grace came out as transgender in 2012, and subsequently began living her life as a woman, and following a series of changes and turmoil that resulted in lineup shifts, cementing their current and best incarnation to date, Against Me! have essentially kickstarted a whole new chapter of their career. Grace’s tradition would not only inform the thematic direction and social weight of the group’s celebrated 2013 record Transgender Dysphoria Blues, but has also made Laura one of the most visible members of the trans community, especially in music (she even nabbed her own AOL docu-series, True Trans with Laura Jane Grace, and released an autobiography, Tranny, last year). Behind the scenes, the group also became independent for the first time in years, following a series of major label efforts, self-releasing and co-producing their last two albums.

A live force to be reckoned with, having shared the stage with everyone from Foo Fighters to The Gaslight Anthem, Against Me! remain one of the best, most refreshing, and, undoubtedly, the most important bands in punk, and with their newfound spark, which carried over into Shape Shift with Me– not the socially urgent masterpiece of True Trans, but an admirable punk effort nonetheless- the badass and relentless energy of Laura Jane Grace and the best version of Against Me! ever is something you have to see in person to fully appreciate. Don’t miss out!

Los Angeles punk trio Bleached are anchored by sisters Jennifer and Jessie Clavin, who, since their teenaged years spent jamming in their parents’ San Fernando Valley garage, have collaborated on various projects, most prominently former band Mika Miko. After that group split, Jennifer and Jessie briefly went their separate ways, but reconvened about five years ago to form Bleached, adding more pop hooks and melodic sensibility to their grungy, raw punk sound, and making a strong first impression with 2013’s Ride Your Heart. However, it was last year’s sophomore effort, Welcome the Worms, that really commanded our undivided attention, employing the production duties of Joe Chiccarelli (Morrissey, The Strokes, Elton John) and Carlos de la Garza (Paramore, YACHT), and incorporating bassist Micayla Grace into the creative process, for what is their most emotionally focused, lyrically substantive, melody-driven group of songs to date, a trend continued on this year’s Can You Deal? EP, which dropped with an accompanying feminist zine stuffed with high-profile contributions. We’ve seen these gals rip live quite a few times in recent years, and we’d seriously recommend seeing them now, because at their rate they’re garnering buzz, they’ll be graduating to bigger rooms in no time.

Canada’s The Dirty Nil have been around for just over a decade, but only began garnering widespread buzz over the past couple of years, impressing with 2016 debut LP High Power, and crafting a quick followup in this year’s Minimum R&B, compiling early singles and EP tracks that newfound fans might have missed. Harboring elements of punk, garage rock, and ’90s-sounding grunge and alternative, the Juno-winning trio simply consider themselves to be loud, aggressive rock and roll, and that’s as apt a description as any. They’re well suited to get fists pumping, beer flowing, and crowds moving, and you won’t be disappointed if you show up early enough to see them.