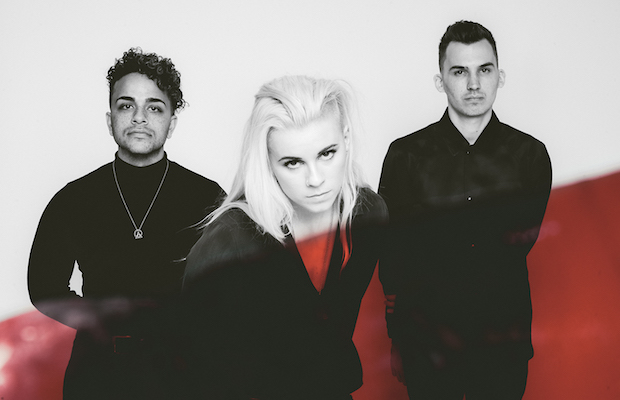 Out in support of their stellar new sophomore album, All We Know of Heaven, All We Need of Hell, breakout Massachusetts alt rock/dark electropop trio PVRIS are set to return to Nashville tonight,Oct. 6 for their largest local headliner to date, at Marathon Music Works, on the heels of a high-profile supporting slot earlier this year at Ascend with Muse and Thirty Seconds to Mars. PVRIS alone is exciting, but making this show even more essential is the addition of beloved electropop singer Lights, whose latest, Skin & Earth, pushes her artistic medium and conceptual nature to new heights, and buzzy up and comer Party Nails. Tickets are still available right here, and whether you’re a die-hard fan or new to these acts, we encourage you to take the plunge and catch what promises to be one of the best shows of the fall. Read on for more about the lineup below!

Though she claims Toronto as her home base, Lights (that’s really her legal name these days, though she was born Valerie Poxleitner) was raised by missionaries, moving around through various corners of the world. Gravitating towards playing in bands at a young age, Lights developed her signature synth-heavy pop sound in the mid-’00s, largely a DIY writing effort, finding swift and significant success with her self-titled debut EP and subsequent LP, The Listening. With even more acclaim and award recognition in her native Canada, the singer connected with the punk community in the U.S., nabbing an early spot on Warped Tour and gaining further attention with a national ad campaign with Old Navy. Though her debut is a near-perfect pop album, later releases would incorporate both more conventional instrumentation and broader EDM, hip hop, and dubstep-dervived influences, helping Lights connect with a wider and even more eclectic audience. Through years of touring with a wide array of acts, she’s developed an unbelievable live show to match, boasting a full backing band, light show, tons of synths, and incredibly polished performance chops. With her recent fourth album, Skin & Earth, her most ambitious to date, the singer also incorporates her love of comic books, going full-on concept album and broadening her medium with a great tie-in comic series that she wrote and illustrated herself. Distinctly different but well matched for PVRIS, Lights on her own would be worth the price of admission.

PVRIS, Lights, and Party Nails will perform tonight, Oct. 6 at Marathon Music Works. The show is all ages, begins at 8 p.m. (doors at 7 p.m.), and tickets are available to purchase for $27.