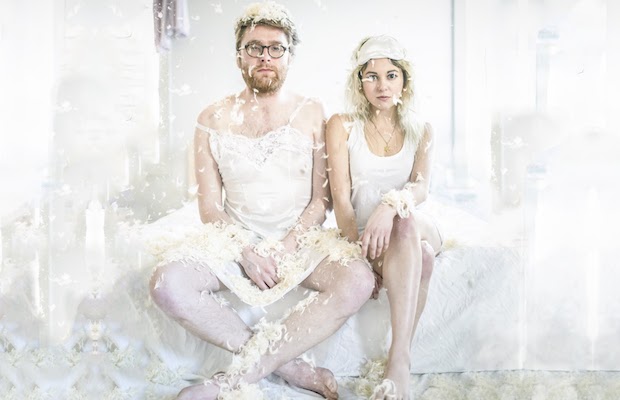 Earlier this year, we introduced you to rising local duo Molly Rocket with a premiere of their fun, subversive video for feminist party anthem “Friction (Dat Booty Doh).” Made up of singer Molly Balsam and drummer Atticus Swartwood, a pair of Wesleyan University graduates who relocated to Nashville to pursue music, the band mix elements of piano pop, soul, rock, and punk in a powerful, theatrical, and anthemic way, creating a light and engaging base to deliver personal, political, and socially conscious songs. The pair will release their debut EP, More Than All This, tomorrow, Sept. 29, but before it officially drops, we’re very excited to bring you an exclusive first listen!

Many of the EP’s tracks were written several years back while Balsam was in college, and have been honed and mined for new relevance throughout the personal, musical, and literal journey that has since brought her to Nashville and led her to her latest outlet. “These songs are about being unafraid to take a stand for your needs whether they be romantic, sexual, or in terms of your own emotional well-being,” Balsam explains, detailing personal struggles, self-identity, relationships, and social causes that helped inform the record, and led her to embrace “Molly Rocket” as a full-on musical persona.

Produced by  three-time Grammy nominated drummer and producer Ken Coomer (Wilco, Will Hoge), More Than All This is a bit more subtle than “Friction (Dat Booty Doh),” but with its eclectic and expert songwriting and sweeping, relevant, and urgent themes, it feels like a powerful first introduction a rising local act that deserve your attention. You can catch Molly Rocket live Sept. 30 at 3 Falls Festival in nearby Hampshire, TN (more), and in Nashville Oct. 25 at The High Watt for GIRLBOSS (tickets), as well as backing local psych pop supergroup TAYLS.

Stream More Than All This below!