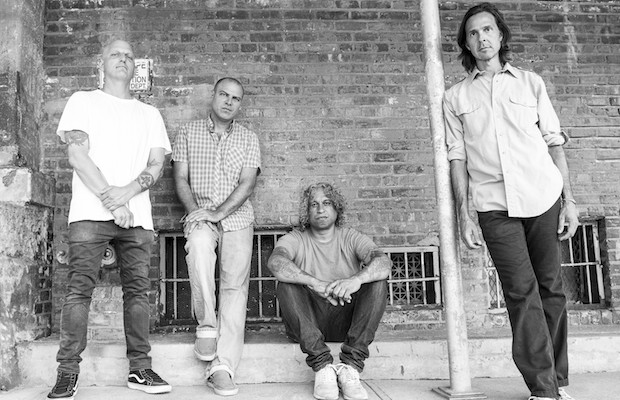 Formed in 1990 in New York City, Quicksand are something of modern legends in the post-hardcore scene, and, though they might not quite have the name recognition of peers like Fugazi or Helmet, the two full-lengths released during their five-year initial run have maintained cult status, and have had immeasurable influence on decades of younger bands to follow. Despite a short-lived reunion in the late ’90s, the group seemed largely relegated to the history books, until springing back to life in 2012, and remaining intermittently active ever since, including a headlining appearance at last summer’s Wrecking Ball.

Though rumors of new music have persisted for several years now (and, famously, they started and abandoned new albums in the late ’90s), Quicksand, who still maintain their original and only lineup, finally revealed earlier this summer that their long-waited third LP and first in 22 years will be called Interiors, and is slated to arrive Nov. 10 on Epitaph Records. That makes their show tonight, Sept. 20 at Exit/In, the group’s first Music City stop in many, many years, all the more unique, since you’ll be catching the legendary act right before they begin a long-in-the-works new chapter. Canadian shoegaze faves No Joy open, celebrating recent EP Creep, and tickets are available here while they last!