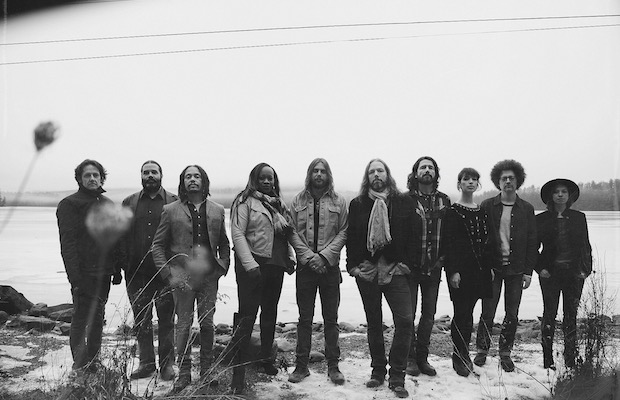 We’ve been hyping this one for months, and we even gave you a chance at free tickets, but now it’s time for southern rock powerhouse The Magpie Salute to make their Music city debut at Marathon Music Works tonight, Aug. 25. Music for the all ages show will start at 8:30 p.m. (doors at 7), and tickets are currently available here. Click on after the jump to find out why this is easily one of our most highly anticipated shows of the entire summer!

While there are no shortage of “supergroups” forming, touring and recording music, not all of them are created equal. Enter The Magpie Salute, which have a much more permanent, seasoned feel, despite only officially getting together in this incarnation recently. The impressive and eclectic collective are stacked with some heavy-hitters, including Black Crowes co-founder Rich Robinson on guitar (you may remember his last trip to Music City), plus fellow Black Crowes alumni Marc Ford and Sven Pipien on guitar and bass, drummer Joe Magistro (of the Rich Robinson Band), guitarist Nico Bereciartua, lead singer John Hogg (Hookah Brown, Moke), former Crowes backing singer Charity White, and two additional background singers, Adrien Reju and Katrine Ottosen. With a roster this robust, it’s no surprise that their sound is huge, as showcased on their debut self-titled record, which dropped earlier this summer. Bringing their national headlining tour to Nashville, The Magpie Salute are set to explode eardrums with filthy rock riffs, powerfully expansive vocals, plus stellar rhythm, but don’t wait until the last second to buy tickets, because with so many talent players involved, this show has the potential to sell out!

The Magpie Salute will perform tonight, Aug. 25 at Marathon Music Works. The show is all ages, begins at 8:30 p.m. (doors at 7 p.m.), and tickets are available to purchase for $35.