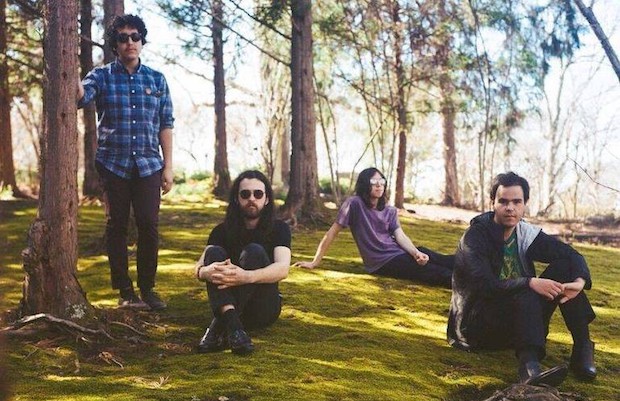 We’ve been keeping on an eye on Third Man Records signees Sun Seeker for well over a year now, since their strong first impression with excellent debut single “Georgia Dust.” The group will release their debut EP, Biddeford, this Friday, July 14, and are set to host a release show the same day at Third Man Records‘ Blue Room with support from Liza Anne. Tickets to the all ages outing are available here, but act fast, because this one might sell out!

We can assure you that Biddeford will be one of the hottest local releases of the summer, because Third Man was cool enough to give us an early listen (you can stream it early here, and hear the whole thing on your platform of choice tomorrow!). Ahead of the show, we also had a chance to sit down with frontman Alex Benick and drummer Ben Parks, to chat about Sun Seeker and their highly-anticipated debut. Read on for our full interview, and be sure to catch the band this weekend at Third Man Friday and at Forecastle Fest Saturday, if you’re making the trek to Louisville!

Sun Seeker and Liza Anne will perform at Third Man Records Friday, July 14 to celebrate the release of ‘Biddeford.’ The show is all ages, begins at 8 p.m. (doors at 7 p.m.), and tickets are available to purchase for $10-12.

No Country: Thanks for coming, and dealing with the e-mail chains to get us here. It says that you formed in 2013 on your Facebook page, so is this debut EP something that you’ve been working on for a while?

Alex Benick: [Sun Seeker] has been going on as an idea, specifically, since the beginning of 2013, and even before this band formed, Ben and I were in a similar style project, called The Stripes, in 2011.

NC: Isn’t another member of the band in another project as well?

AB: Fox Fun. We were all in the band Fox Fun, but that’s Asher (Horton), our bass player, those are his songs. Fox Fun is still its own thing, his side project, but the band Stripes is what kind of slowly turned into Sun Seeker.

NC: So then you recorded your first single, “Georgia Dust,” and Third Man Records approached you, or were they involved in the recording process of that song?

AB: They weren’t involved in the recording aspect of that one. We had started recording before we were approached by Third Man, but when they hit us up, it catalyzed the recording process of the EP.

NC: We imagine when you get that call, you tell them, “Sure! We’ll work with you!”

AB: Yeah, absolutely. It was super easy. The first two tracks that we finished, we just sent over, and [Third Man] was like ‘Yeah, these sound good!'”

NC: Can you talk about the process of finishing the new EP? It’s been over a year since you released the “Georgia Dust” single, what’s happened since then?

Ben Parks: So, we did the single in February of 2016, and since then we’ve been playing a lot, and at first when we were contacted by Third Man, we weren’t exactly sure what the relationship was or where it was going. But they let us know they were interested in doing another release, so we sent them a bunch of songs, and they were actually really involved in helping to pick songs that they felt would be the best six songs. We’d mutually agreed to just make it an EP. So then we went back into the studio with Buddy Hughen, who did “Georgia Dust,” and kind of finished up the six songs, and it’s just been a process of getting the word out with Third Man.

NC: We really like the kind of throwback intro, almost like a ’90s video game start up screen, which then goes right into the first track “Churchill.” We also like the mellow, semi-psychedelic vibes you guys create right from the start. Do you make a conscious effort to keep a theme like that going, or is it just how it turns out?

AB: I think it’s just kind of how it just comes out. We’re never super focused on keeping a vibe. Things happened really naturally as the songs progressed in rehearsals.

NC: The record does flow really well. It’s the kind of record you can just play on repeat. Perfect summer music you can just throw on anywhere, not looking for tracks.

NC: Have to talk about the pedal steel guitar on this record, especially on the title track, “Biddeford.” The instrument is really incorporated nicely, subtly, almost like a backing vocalist.

AB: Spencer Cullum Jr. He is Steelism, that’s his group, and he plays (pedal steel) for Miranda Lambert. We never had to work too hard with him. It’s also Buddy’s awareness of where to layer things in a track as a producer and engineer. Personally, I wouldn’t have thought to keep it so low in the mix as much as he did. He’s got a great head about that stuff.

NC: Track four, “Nothing But Our Last Words,” which is the title and part of the hook, followed by the line, “it seems we’re always reading backwards.” Is there any kind of deeper meaning to that, or did you just like the way it sounded when you wrote it?

AB: There definitely wasn’t much deep meaning to those lines in particular. I feel like most of the time it’s just like a quick concept I feel really passionate about, but then again I also really value phrasing, and lyricism, and how words, sonically, can fit to a melody. I don’t think the meaning behind the lyrics is always the key to writing a really bad ass song.

NC: We agree, and we think these lyrics in particular hit that sweet spot of melding with music perfectly, and that’s the hook we found ourselves singing in our heads all day.

AB: Exactly. And then everyone questions the meaning, and they put whatever meaning that want behind it.