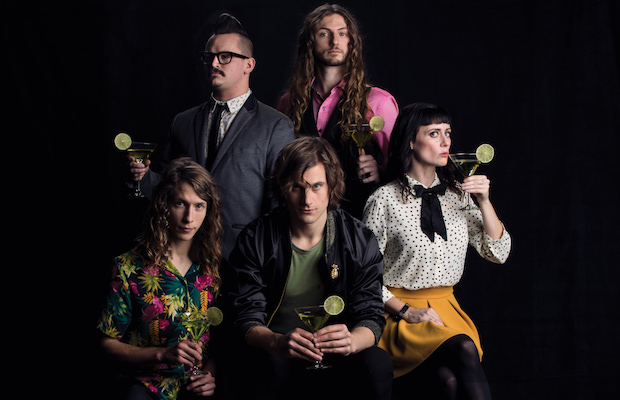 Hailing originally from Grand Rapids, Michigan, self-proclaimed “surf disco” band The Outer Vibe relocated to Music City last year, and have been cranking out a steady stream of energized new tunes ever since. Following the release of their 2015 full-length, Full Circle, the band, who met in college, have been touring the country and drumming up buzz, acclaimed for their genre-bending, dance-worthy style.

Ahead of a headlining spot tonight, May 10 at the Spotlight615 showcase at Tin Roof Broadway (details here), and before we welcome them to take part in our Acme showcase series on June 27, we wanted to bring you a premiere of the band’s latest- an uptempo story of seduction called “Fionna.” Along with the premiere, we caught up with The Outer Vibe to get you up to speed on this rising, newly local band, so check out our quick Q&A, catch them tonight, look out for more ahead of their Acme date, and hear “Fionna” below!

NO COUNTRY: For people just now discovering you, can you give us the super abridged version of your band’s history so far? When did you form, how did you meet, and what led you to decide to move to Nashville?

THE OUTER VIBE: We’re a bunch of music school kids who studied in college, so that’s how we found each other. The current line-up is about 4 years old. We spend a lot of time touring, and our first few stops in Nashville included playing shows (our very first was at The Basement!), sleeping on our drummer Noah’s aunt’s couches and floor, meeting a friend of a friend for coffee, our first co-write, etc. Before we knew it, we were signing a publishing deal with Catch This Music (CTM), and we finished a tour and moved into a house we had never even seen that our publisher found for us. That was in October, and here we are!

NC: How has your experience in Nashville been so far?

TOV: Really, really great. The standard is high here and it’s been inspiring us to raise the stakes for ourselves. We’ve made some cool friends, played with some fun bands, and done co-writes with some really talented people. We are grateful for the support and guidance from CTM – they keep us busy. The whiskey game here is strong… but no one makes craft beer like our hometown, Grand Rapids, MI.

NC: There are clearly a lot of different influences at work with what shapes your sound. What do you all have the most in common when it comes to taste in music, and where do you most differ? Is deciding what to listen to in the van a struggle?

TOV: There are lots of bands all of us really like. Spoon, Father John Misty, The Strokes, Lake Street Dive, Lettuce, Cage The Elephant,  Electric Light Orchestra, The Beatles. From there, we all have somewhat diverse taste in music, stemming from our individual influences. No one really argues over what to listen to in the van. Usually the driver gets to choose. We have a pretty good collection of CDs from bands we’ve played with… we listen to those too.

NC: “Fionna” seems to be a song about struggling with the temptation of cheating on a significant other with someone housing the band (on the road, presumably?). Is that accurate? It seems too specific not to be about a personal experience – how autobiographical is it?

TOV: It’s definitely a true story from the road. When a girl asks every band member to sleep with her and none of them do, it’s strange enough that we wanted to write a song about it. We decided to the frame the story around temptation, mainly to add to the intrigue and leave people wondering.

Fionna is a super dope real life person. The phrases spoken in French at the end of the song are actually quotes of things she said to us (in English) while we were at her place.

NC: Did you change Fionna’s name, or this song about to be a big surprise to someone out there?

TOV: Fionna is her real name… and this song will definitely be a surprise to her. HOWEVER – she did ask us to write a song about her. For a hot second we considered telling her about the song in advance, and then we decided we’re just going to let it find her on its own.

NC: A recurring theme on your recent artwork seems to be CDs. In a streaming age and with so much emphasis back on vinyl, what’s your affinity for CDs both as a format and as iconography?

TOV: For our latest EP titled “Surf Disco Compacto Vol. 1”, we started burning our music to subtly labeled silver/silver CDs, the same ones that are pictured in the artwork. Since we do short runs of CDs, we are able to modify or add to the track-list whenever we feel the need to keep thing fresh. It’s all a part of creating something fun that we can share with people. We thought it would be cool to have this mysterious CD pop up throughout our artwork and then when you come to our show, whoop! there it is at the merchandise booth. Also, we grew up listening to CDs, so maybe it’s a way for us to say thanks to an old friend.

NC: What else do you have planned for the rest of this year. Can we expect a followup to Full Circle soon?

TOV: We’re going to continue releasing singles, and a full length is in the works. We have probably 25-30 songs written and easily that many more on deck. We are also looking to expand our distribution and management team before the next full length release. This summer we will be on the road a lot, but we will be back in Nashville at the end of June to play a No Country For New Nashville show!