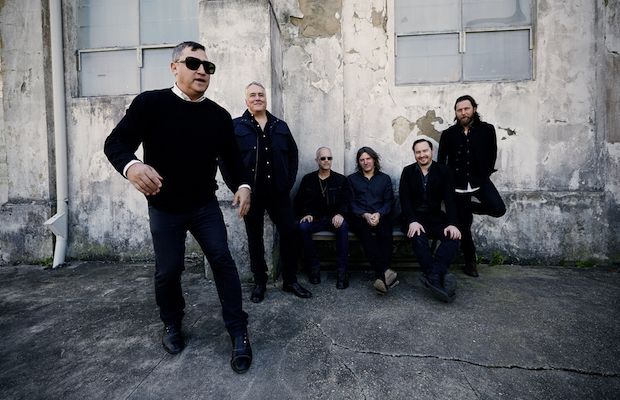 Formed more than 30 years ago in Cincinnati, The Afghan Whigs have always been a band hard to put into a box. Circling the grunge and alt rock explosions of the late ’80s and early ’90s, all the while channeling early garage rock, midwest punk, and classic r&b, the band rose through the ranks of indie label cred to major label stardom, maintaining a devoted following and always fresh sound until disbanding in 2001. A decade later, they became active once more, and, since their first album in 16 years, 2014’s Do the Beast, have felt more energized and active than ever, continuing to tour and settle into their current lineup, which, aside from frontman Greg Dulli and original bassist and co-founder John Curley, includes guitarists Dave Rosser and Jon Skibic, drummer Patrick Keeler, and multi-instrumentalist Rick Nelson.

For their upcoming 18th album, In Spades, due out this Friday, May 5 and currently streaming in full, the group recorded live as a full band for the first time in decades, capturing their raw energy and genre-bending sensibilities more accurately than ever. In anticipation of the record’s release, the Whigs also just announced lengthy fun of fall tour dates with Har Mar Superstar, which includes a Sept. 29 stop at Exit/In, their first Nashville show since 2014. An intimate chance to experience perhaps one of the most underrated rock bands of the alternative movement, tickets are available beginning Friday, May 5 at 10 a.m. CDT, and VIP packages are on sale now, both right here.