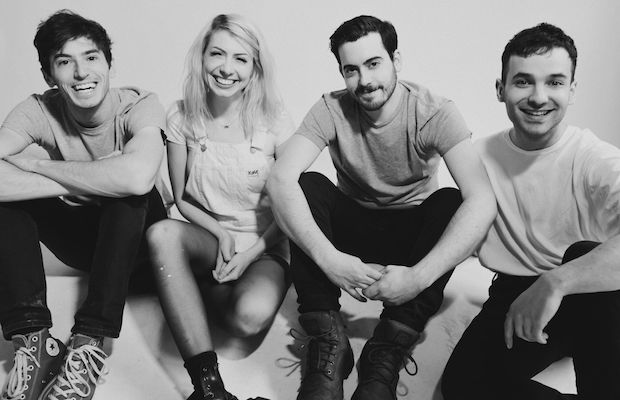 Returning after a pair of supporting shows at Mercy Lounge and The Stone Fox in 2015, Brooklyn grunge pop group Charly Bliss are back in town April 29, on the heels of their debut full-length Guppy, to headline The High Watt, along with local duo and kindred spirits Sad Baxter! A buzzy, band-you-should-know, Charly Bliss combine a nostalgic, poppy, energetic pop rock sound with more serious and personal lyrical themes, and with several years of cultivating a following and refining their style and live show in the DIY scene, they feel primed to break out to broader national recognition. Tickets to the performance, easily one of our most-anticipated of the spring, are still available here, but we’re also giving away a pair of tickets to one lucky fan! Read on for more about the lineup, and enter below!

Formed half a decade ago in Brooklyn, New York, buzzworthy bubble-grunge/power pop outfit Charly Bliss spent their early years gigging around the city, before releasing their stunning debut EP, Soft Serve, in the summer of 2014. Fueled by the deeply personal lyricism and super sweet delivery of frontwoman Eva Hendricks, juxtaposed with often angsty or self-reflective themes, the band have built a grassroots fanbase over the last few years, touring with Veruca Salt, and scoring spots opening for the likes of Sleater-Kinney and Glass Animals. After a few false starts, Charly Bliss, rounded out by Hendricks’ brother Sam on drums, Spencer Fox on guitar, and Dan Shure on bass, finally came to grips with their pop-leaning sensibilities, and found a balance between that and their Weezer-esque knack for crafting huge rock hooks, to forge debut full-length, Guppy. Set for release on Friday, April 21 (stream it early here), the album is the sound of a band coming into their own, both in its ability to create a sort of perpetual, pleasant, high school nostalgia in its upbeat, grungy power pop, and also in Hendricks’ reflections on heartbreak, insecurity, misogyny, and angst. Hovering between the punk and pop world, Charly Bliss are a band fueled by raw emotional undertones and hyperactive hooks, and while Guppy cements a spot on our year-end lists with each listen, we eagerly await the group’s return to Music City!

Winner will be announced Wednesday, April 26 at 5 p.m. CDT, and will receive one pair of tickets. Good luck!