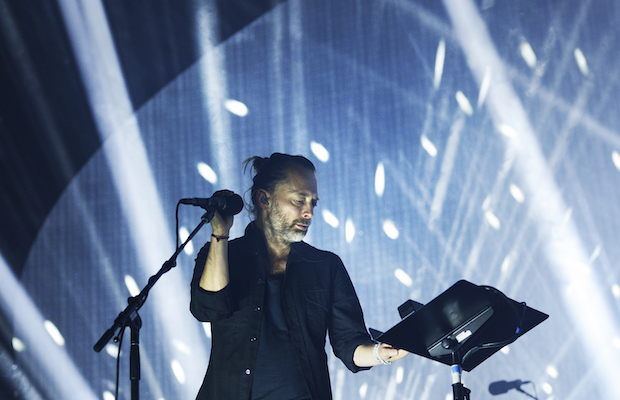 As we pointed out earlier this year when their latest trek of North American dates were announced, statistics would suggest that Radiohead might never again play Nashville proper (Bonnaroo, on the other hand, is always more likely). It’s only happened once ever, more than two decades ago, and with an average of only about a dozen U.S. dates per year throughout their career, a number which seems only to be dwindling, Music City isn’t the same priority as more frequent visits to major markets like New York, LA, Chicago, and Atlanta, the latter where, though not in five years, they’ve performed around ten times throughout their existence. That’s why, when a return appearance at Atlanta’s Philips Arena, as part of a short run of shows leading up to Coachella, was announced, we leapt at the chance to buy tickets, and road tripped down to see the legendary group play with Dudu Tassa & the Kuwaitis. We were fortunate to have the chance to take some photos of the surreal evening as well, so, below, check out our review and gallery from the second night of Radiohead’s first U.S. run since 2012!

As if some sort of universal conspiracy to undercut my sheer joy at seeing Radiohead for the first time in five years, fourth time ever, and first time at a non-festival, I got the news the day before the show that Atlanta’s I-85 had caught fire and collapsed. Thankfully, no one was injured, but as the interstate connecting the hotel I’d booked on a whim, and the downtown arena were the band were set to play, I left excruciatingly early to prepare for the worst- and, well, there actually wasn’t much traffic; so much for that. Arriving at the show with plenty of time to kill, I indulged in some drinks at the nearby CNN plaza (pro-tip, you can drink for like 1/3 the price- sorry, Philips Arena), waited for the line to die down, and made it it to grab my seat just in time for the show.

My first time at Philips Arena, my focus was drawn to how compact and tall it seemed to be (for you Nashville folks, it’s marginally larger in capacity as Bridgestone Arena, though it doesn’t look it), and how, unlike any other arena I’d been to, the bulk of the entire right side was made up of suites (rather than a typical middle suite level wrapped around the whole room). The sound pumping through the house PA was nice and clear, and through a bit far back, my line of site was perfect. Settling in, the anticipation suddenly came to a head, as I realized that I would, in fact, be seeing one of my favorite bands in all of existence in only moments. 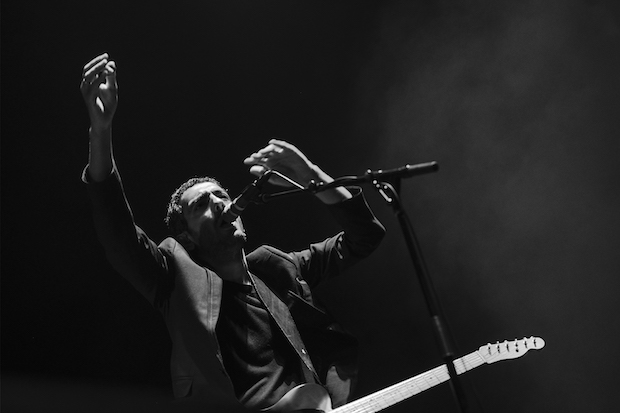 I hadn’t done a lot of homework on openers Dudu Tassa & the Kuwaitis, but I did know, from a press release I’d received not long before the show, that they were a cross-cultural, Jewish-Arabic band from Israel (where Radiohead will perform later this year), and their music is a revival of that of acclaimed Iraqi composers the Al-Kuwaiti Brothers, who are Tassa’s grandfather and great uncle. Despite a connection to Jonny Greenwood, who collaborated with them a few years back, I suspect that their middle eastern multiculturalism on full display for a tour in the U.S. in the midst of our current political climate was no accident. A sort of fusion of western rock influence and traditional music, the band sang in Arabic, and played a mix of conventional instruments, strings, and percussion. Ever the dynamic frontman, Tassa was joined by a stellar vocalist (I believe to be Nissren Kader, though I didn’t catch her name during the show) for much of the performance, and, though a sonic far-leap from Radiohead, I definitely understood the musical connective tissue. Ending a meager half hour, the band’s vibrant opening set seemed to satisfy the rapidly filling room of anxious Radiohead fans, even if many weren’t familiar with their music. 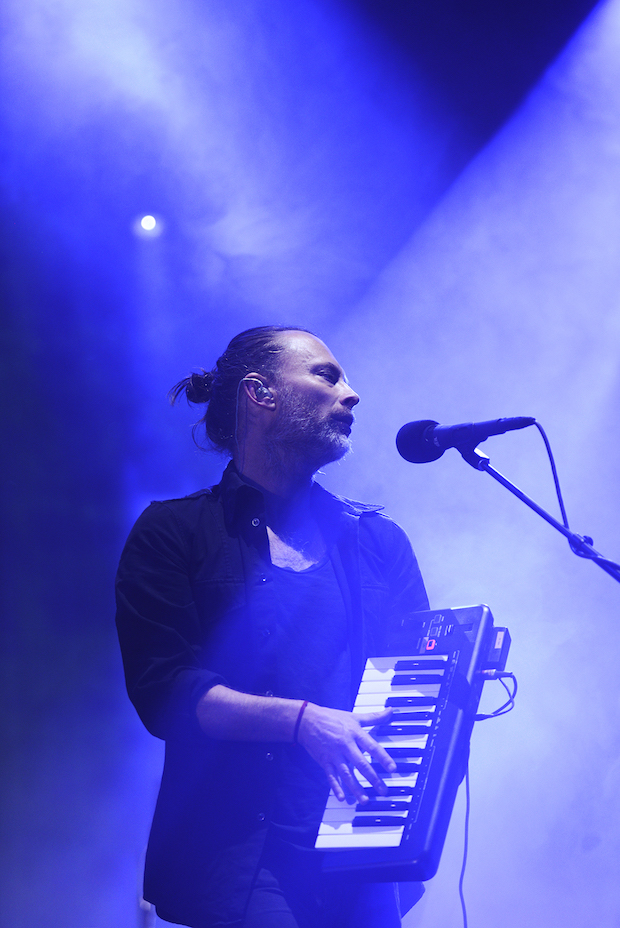 As some droning, mysterious tones pumped through the house amidst a brisk changeover, I snuck to the lobby, only to run into none other than The Flaming Lips’ Wayne Coyne, who’d just played Nashville a few nights earlier; a further reminder that a Radiohead show is an absolute must-see event. Moments after settling back in, the lights dropped, and the band emerged, bathed in a swath of blue lights and crystalline lasers, cooly taking their stations for what was only their second performance of the year. As this is their first U.S. tour since the release of last year’s A Moon Shaped Pool, I anticipated to hear a lot from that album, so it wasn’t a shock when the first three tracks were all newer cuts.

Though they play a somewhat different setlist every night, so much care seems to get in the structure and sequence of every Radiohead show, and with opener “Daydreaming,” they eased into their performance with a subtle, dreamy build, offsetting the elation and awe of the moment of realization that I was, in fact, seeing this larger-than-life band in person once more. Manipulating something electronic from a stand, Thom Yorke exuded his sort of hyper-focued otherworldliness while, like the rest of the band, so seamlessly evaporating in the dense, hypnotic, and so flawlessly recreated soundscapes of the band’s lush catalogue. By third tune “Ful Stop,” Yorke was making a tiny handheld keyboard look cooler than anyone else I’ve ever seen attempt such a feat, and moving straight from the new songs to “Airbag,” the opener from perhaps the band’s most famous album, 1997’s OK Computer, left my jaw on the floor.

Radiohead aren’t the type of band who would do an anniversary tour, but with OK Computer turning 20, they did seem to be giving its material some extra love, incorporating almost as many songs from that album as A Moon Shaped Pool (the rest of the set was a fairly even, retrospective split, omitting debut Pablo Honey, which is largely ignored save for the occasional “Creep”). My first Radiohead show, one of the best shows I’ve seen in my entire life, and the metric by which I compare all others, was their legendary Bonnaroo ’06 set, and, though something was special in the air that night, this performance came closer in its energy and transcendent spirt than the two others I caught in the decade between. Perhaps frustrating to casual fans, I loved that they seemed to be reaching for a lot of lesser-spoken about and non-single tracks, ignoring obvious cuts like “The Bends” or even “2+2=5” (the one track I would have expected from often-forgotten album Hail to the Thief, though, surprisingly, they played two others). 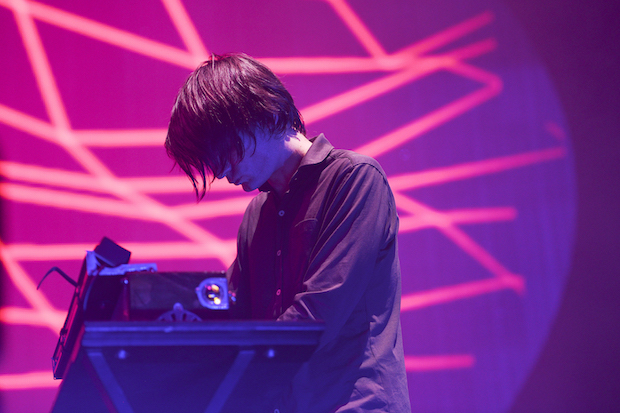 A sort of silent and hyper focused character, Yorke made little in the way of remarks between songs, though he did take an opportunity to take a jab at the state of U.S. politics. Elsewhere on the stage, the rest of the band started a bit entranced and focused, but seemed to gradually become more animated throughout, especially as the set moved towards some of the thicker, heavier, rock-leaning work. The added touch of live, second drummer Clive Deamer was especially enthralling, giving the band more space to double down on grooves, as Clive locked in and traded beats with Philip Selway. One thing not often pointed out about Radiohead is the fact that their lineup has remained unchanged since they formed over three decades ago, and the lifelong friends and musical companions are, at this point, a seamless, single-minded, and flawless unit; the best band in the world, perhaps, and one that’s withstood so many years of musical evolution.

Having seen the group at three festivals, I’ve been conditioned to assume that the body of the set is simply a first course, and this show proved no different. After an unbelievable block of songs that included vibey tracks like “All I Need,” driving and pointed dynamics like “I Might Be Wrong,” and thrilling fan favorites such as “Subterranean Homesick Alien,” the set ended with understated In Rainbows single “House of Cards,” marking the first time they’d played it live since 2012. With its deconstructed, guitar-driven melody and moody, bellowing, and intimate vocals, it felt like the perfect comedown from a eclectic, sweeping, and career-spanning show, ending, as it began, with a simpler, more scaled down tune.

But, of course, that wasn’t truly the end. Radiohead returned within minutes for an encore beginning with “No Surprises,” which, in sequence, feels like a bit of subtle British humor. Never quite knowing what will or won’t make the set on any certain night, the dense, electro-strings and driving rhythms of “Burn the Witch” brought the energy level all the way back up, only to make the room lose their mind as it moved into “Paranoid Android,” which, with its solos, dynamic changes, and extended ending was absolutely breathtaking, and quite possibly my favorite moment of the show- I’m sure I got chills more than once, but the last 2 minutes of that song, I know the chills were nonstop. A five song encore, ending with the synth-heavy, industrial “Everything in Its Right Place” (can we talk about how that song is 17 years old and sounds like something that could have been released last week??), and they were gone yet again, but not for long.

Encore number two began with the sparse “You and Whose Army?,” Thom perched at a piano equipped with an uncomfortably close camera, projected onto the massive screen behind, that he peered into with one eye, creating a trippy, kaleidoscopic juxtaposition to the otherwise somber and melancholy song. The dynamic opposite, after the band cranked it up with the more conventionally rock “Bodysnatchers” (Radiohead get a lot of praise for being weird and artsy, but they’re also damn good at just writing loud, upbeat alt rock too), I assumed they were calling it a night, and they certainly would’ve earned a fitting end. They must’ve been feeling extra generous though, because, unlike the evening prior, we were treated to a third encore, this time of “Karma Police,” perhaps their most recognizable hit of all time (and one that only occasionally makes it to set). I don’t care if it’s cliche, but I love that song, and the album it’s from is one of my top five of all time; though every moment of the varied and eclectic set was unrivaled, ending it with a 20,000 person singalong of likely the first Radiohead tune I ever heard left me with a full heart and long-lasting memories of a perfect night.

You and Whose Army?
Bodysnatchers