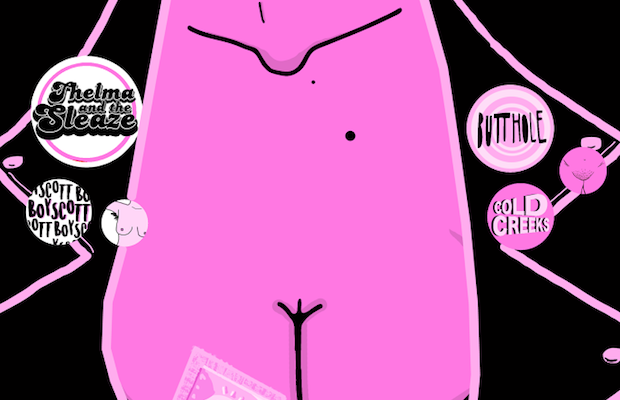 We’ve been raving about the wacky, trashy antics and immensely fun and kickass live performance of local grungy, alt rock outfit Thelma and the Sleaze for years, so anytime they headline a show, whether it’s somewhere you never expected to see a band like a McDonald’s or laundromat, or somewhere more conventional like their performance tonight, March 25 at Exit/In, we’ll always recommend them. Tonight’s extra special though, and not just for the added allure of the strong local lineup- Jersey transplants and breezy indie rockers Boyscott, bluesy indie group Cold Creeks, and grungy indie punks Butthole– the show also doubles as a benefit for Planned Parenthood, an important organization that seems to be unfairly under fire at increasing frequency these days.

While the misconception (or conservative smear campaign) used to vilify Planned Parenthood is that it’s effectively just an abortion clinic (PP does provide abortions, but that accounts for only a small fraction of their services, and is never funded by federal tax dollars, as that would be illegal – ironic, since that’s the motivating issue used to push to defund the organization), the truth is Planned Parenthood provides essential health and screening services, education, treatment, contraception, counseling, and more to women, and is an invaluable resource for sexual and reproductive health, and pregnancy prevention. If you’re looking for a way to give to the organization, simply buying a ticket for tonight will go to their benefit, plus you get to see four amazing bands, and if you want to give even more, Planned Parenthood will be on site accepting donations, handing out condoms, and more. Great music for a great cause; doesn’t get much better than that!

Thelma and the Sleaze, Boyscott, Cold Creeks, and Butthole will perform tonight, March 25 at Exit/It. The show is 18+, begins at 9 p.m. (doors at 8 p.m.), and tickets are available to purchase for $12, with proceeds going to benefit Planned Parenthood.