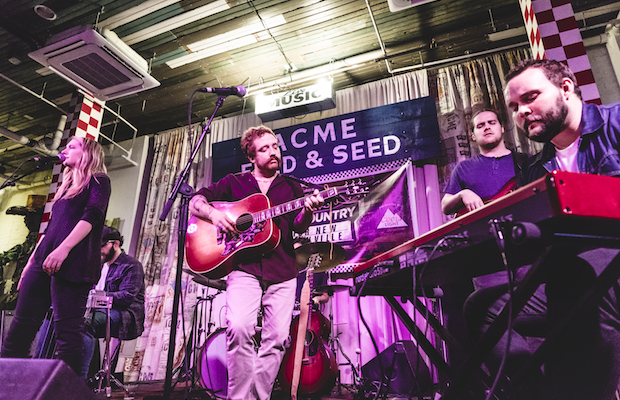 Our long-running, free, bi-monthly Acme Feed & Seed showcase series is well into its third year, and still going strong! For our Feb. 28 installment, we were pleased to welcome back local Americana/folk mainstay Diamond Carter, along with cinematic pop newcomers The Daybreaks, and we kicked the night off with a live DJ set care of Acme Radio. Read on for a full recap, and check out some great shots from contributing photographer Jake Giles Netter.

Eager to see what spring had in store, after the warmest February I can ever remember, I made my way down 1st Avenue towards the corner of Broadway wearing only a t-shirt and a light jacket. In theory, warmer winters seem all well and good, but deep down I think we all realize 70 degrees in February can’t be good for the long term. Best not to dwell on it too much, especially with some awesome music about to start at Acme. 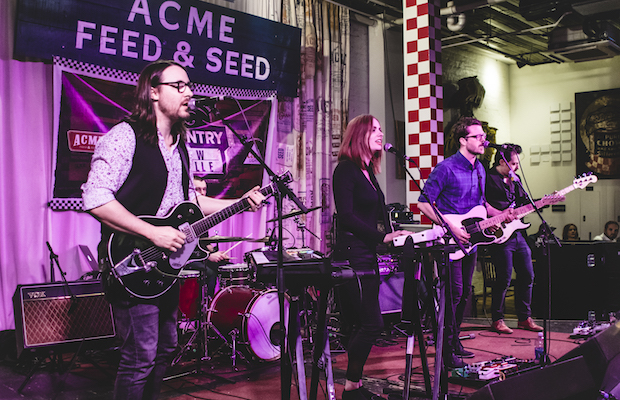 Our first performers of the evening, The Daybreaks, are a relatively new outfit in the local scene. They formed in early 2015, during songwriting sessions between dual front-persons Kaleb Jones and Heather Bond. By early 2016, once they got Adam Bokesch and Zac Stred (of Milktooth) to play on the recordings, they added them to the live roster. Their music, augmented by Heather’s stellar work on keys and her powerful vocals, has an art house pop feel, similar to the band Metric. Sharing lead vocal responsibilities, on Kaleb’s songs the sound is more of a Lumineers vibe or possibly even Local Natives on his falsetto. The two played off of one another very well, utilizing stunning vocal harmonies that drew the large audience in. From the start, it was obvious that all of them have been working hard together to refine their live show.  My favorite song of the set was “The Stranger,” but all the material they played from their yet-to-be-released record showed tremendous potential. Unfortunately, we’ll all have to wait until the summer, which is the tentative release date, to really dig in. Regardless, jump at any opportunity you get to see The Daybreaks live, because we have a feeling this band have a very bright future. 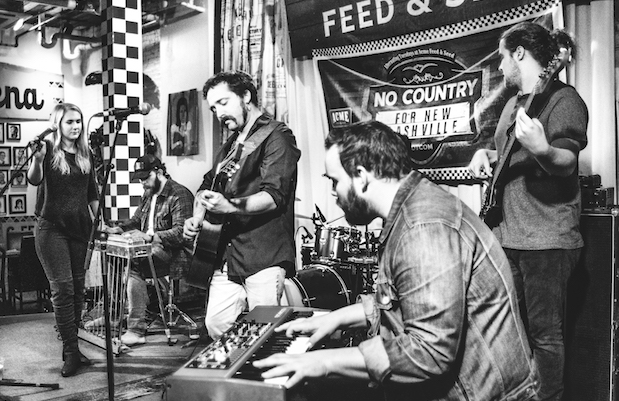 Next up was  a musician that’s no stranger to No Country. Diamond Carter helped us get our Acme showcase off the ground, playing one of the very first installments back in the summer of ’14. He’s also been a fixture in the Nashville rock scene for several years now, and for his latest appearance at Acme, he’d rounded up a group of his friends to sit in as his backing players. Their set started out with a bit of an island vibe, similar to a Jimmy Buffet song, all be it laced with splendid peddle steel guitar. His second song, “Looks Ain’t Gonna Pay My Rent,” off his 2015 self-titled country/folk leaning LP, was a crowd favorite, and his trademark banter in-between songs showed me he’s still got it (not that I doubted him for a second). I also recognized some faces in the crowd, including Ian Ferguson, who regular readers should be familiar with. I always enjoy seeing movers and shakers in the local scene enjoying each other’s performances, and whenever D. Carter is performing on stage, there’s sure to be some sprinkled about. He rolled through his set with ease, playing some other great songs from the aforementioned LP, and some older tracks too. If you’ve heard him before, than you already know how talented he is, but if you’re not hip, get caught up ASAP, which is even easier to do now, thanks to  a live weekly show, Sunday Happy Hour with Diamond Carter, broadcast live on Facebook from The East Room. But before you to check that out, enjoy a great spread from photographer Jake Giles Netter, and keep an eye out for info on our next  Acme showcase!