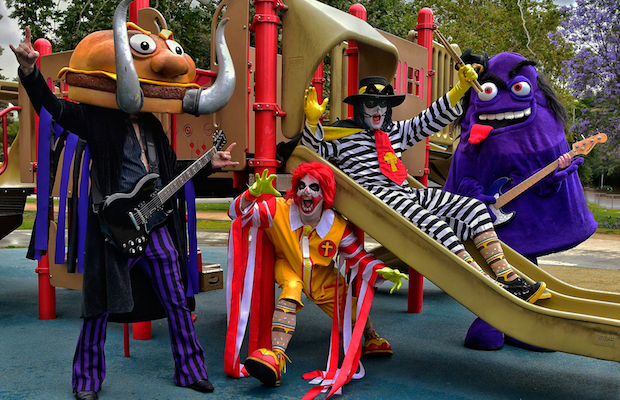 Do you like metal, parody, gimmicks, anti-consumericism, surreal imagery, mariachi music, The Simpsons, and fun? Well boy do we have a show for you. Tonight, March 15, Mac Sabbath headline Exit/In, joined by Metalachi and Okilly Dokilly, and we guarantee it won’t be like anything you’ve ever seen before (unless you saw The Pizza Undergound a couple years back; it might be a lot like that, actually). Hailing from Los Angeles and with identities and origins shrouded in mystery (it’s said they got their start hosting secret shows in the basements of fast food restaurants), Mac Sabbath dress like demented versions of familiar McDonald’s characters, and play music either directly parodying or stylistically derived from the classic sounds of Black Sabbath, singing about McDonald’s, the fast food industry as a whole, GMOs, consumerism, and more. What started a joke has gained viral fame, fueled by the fact that they’re legitimately good, and since making their live debut in 2014, they’ve actually become a pretty regularly touring act. This run, they’re selling a special coloring book, which features a copy of their first-ever studio recorded single, “Pair-A-Buns.”

Metalachi are, you guessed, a metal mariachi band. “The world’s first and only heavy metal mariachi band,” according to their claim. Like Mac Sabbath, there’s a definite gimmick element to it; they dress in a crazy mix of metal and mariachi gear, they have a wild backstory (it’s hard to tell what’s fact or fabricated; they might be from Mexico, but are seemingly based now in LA), and play re-imagined versions of familiar metal songs. Also like Sabbath, what they do works amazingly well, because they’re insanely good. Somehow the weirdest concept on a conceptually weird bill, Phoenix newcomers Okilly Dokilly are, in most respects, a pretty conventional metalcore band, except for the fact that they only write music about popular Simpsons character Ned Flanders, a subgenre they dub “Nedal.” Their debut album called, what else, Howdilly Doodilly, dropped last fall, and, like the rest of the lineup, it combines humor and parody with actual, good metal. Let’s face it, this show either sounds amazing or idiotic to you, and if you’re in the former camp (like us!), you can still get tickets right here.

Mac Sabbath, Metalachi, and Okilly Dokilly will perform tonight, March 15 at Exit/In. The show is 18+, begins at 9 p.m (8 p.m. doors), and tickets are available to purchase for $20.