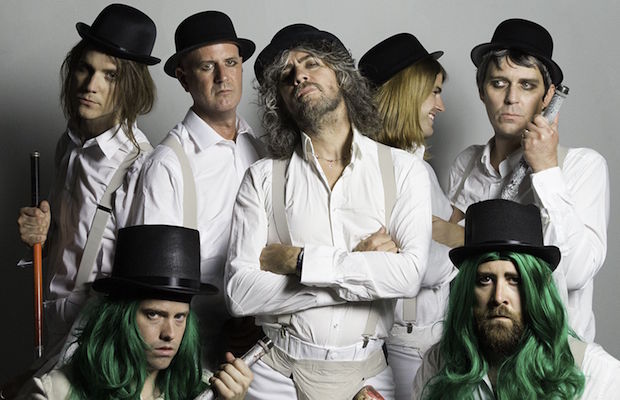 Out in support of their new and fourteenth album Oczy Mlody, something of a return to form after years of weirder releases and collaborations, seminal neo-psychedelic rockers The Flaming Lips are set to return to Nashville March 29 for a performance at War Memorial Auditorium. Numerous festival outings aside, it’s actually been ages since the band played a proper, headlining, indoor show in Music City, and inside is without a doubt the most immersive way to experience their trippy, dazzling, transcendent, and unrivaled live show. We’ve been talking this up for months, but if you still haven’t bought your tickets, you can do so right here. Or, if you’d rather roll the dice, we’re also giving away a pair of tickets to one lucky fan! Read all about the show and enter below.

Formed almost 35 years ago in Oklahoma City, psych-rockers The Flaming Lips are something of modern legends, and their eclectic, celebrated, and storied career can roughly be divided into five distinct chapters. In their earliest days, the group’s sound was more reflective of the ’80s, incorporating elements of post-punk and noise rock into a style that became increasingly more psychedelic as they rolled into the ’90s. By ’93 sixth full-length Transmissions from the Satellite Heart, which produced the group’s first widespread commercial hit, “She Don’t Use Jelly,” the Lips had set the template for what they more closely resemble today, flirting with poppy, neo-psychedelic sounds (mixed with the era’s ’90s alternative) and frontman Wayne Coyne’s signature falsetto, and settling into the longstanding core trio of Coyne, founding bassist Michael Ivins, and multi-instrumentlaist Steven Drozd. Perhaps one of their most polarizing if not most interesting periods, the band spent the mid to late ’90s conducting a series of sonic experiments, which resulted in an album meant to be played on four stereos at once, all the while grappling with some personal demons, and watching a dip in mainstream interest as they became increasingly more weird, simultaneously cementing a cult fanbase.

In 1999, already 16 years into their career, The Flaming Lips began something of a second renaissance, and entered what would become their most commercially and critically successful period, and one most beloved by modern fans, with the release of ninth album The Soft Bulletin. Something of a modern masterpiece, the LP fused the Lips’ earlier pop and alternative sensibilities with their unabashed psychedelia and willingness to experiment with new sounds and recording techniques, resulting in a more ambitious and layered work than ever before, but also one with broad appeal. Their next album Yoshimi Battles the Pink Robots was every bit as epic and transcendent, and that one-two punch, along with the refined, bizarre, colorful, and joyous live show perfected in the same era, ensured that the band will forever operate in the upper echelons of rock star status, headlining festivals and playing large rooms around the world.

Over the last decade or so, the group have gone back to embracing their weirdest tendencies, releasing music at a more prolific pace than ever, sometimes to mixed results. While still capable of crafting wonderful, focused LPs (their most recent, Oczy Mlody, a prime example, and something of a return to form), and despite some gems like a reimagining of Dark Side of the Moon, a Beatles tribute compilation, and more, the abundance of reissues, Record Store Day gimmicks (while cool, they are numerous), and occasional public controversy, has, perhaps, diluted their pristine early ’00s reputation a bit; a Lips overload, if you will. Where The Flaming Lips are without a doubt unrivaled, though, is in concert, with a show so weird, evolutionary, immersive, and relentlessly positive, that it feels almost like an out of body experience. Certainly one of the best live bands in the world, you absolutely need to see them at least once in your life, and if you already have, then we probably don’t need to convince you to keep going back, especially since their show seems to change drastically every few tours.

Winner will be announced Monday, March 27 at 5 p.m. CDT, and will receive one pair of tickets. Good luck!