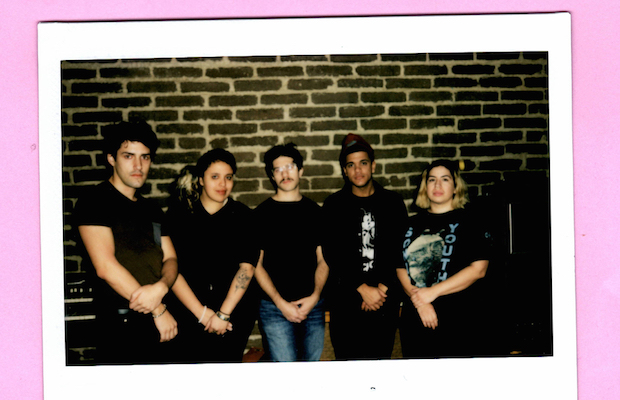 We don’t need a holiday as an excuse to acknowledge all of the badass women making music, both in Nashville and beyond, but the fact that it’s International Women’s Day does make this show tonight, March 8 at Third Man Records feel all the more fitting (but, let’s be real, these artists are amazing 24/7, 365, they’re not defined by their gender, and this would be a must-see show on any date). What is actually the combination of two planned events (the Drkmttr show we previously reported has been absorbed into this one), politically charged Providence punks Downtown Boys, currently working on a new LP for Sub Pop, head up the bill, along with soaring, minimalist  post-punk project Sneaks, the live alias of talented DC artist Eva Moolchan. Converging with this tour for one night only, Sad13 is the poppier, quicker solo vehicle for Speedy Ortiz frontman Sadie Dupuis, whose fantastic, feminist, indie pop full-length debut, Slugger, arrived last fall, and, in the opening spot, Detroit grunge pop songstress Stef Chura is celebrating her stellar debut, Messes. And, as if that wasn’t already an insanely cool night of music, Philadelphia psych folk group Shadow Band are playing a free in-store performance at 6:30 p.m., downstairs in the record shop. The rest of the show will take place upstairs in the Blue Room at 8 p.m., and will be recorded live (meaning you can buy a special black and blue vinyl). Like most Third Man events, this performance is all ages, and you can still snag tickets here!

Downtown Boys, Sneaks, Sad13, and Stef Chura will perform tonight, March 8 at Third Man Records. The show is all ages, begins at 8 p.m. (doors at 7 p.m.), and tickets are available to purchase for $15. Shadow Band will also host at a free in-store performance at 6:30 p.m.