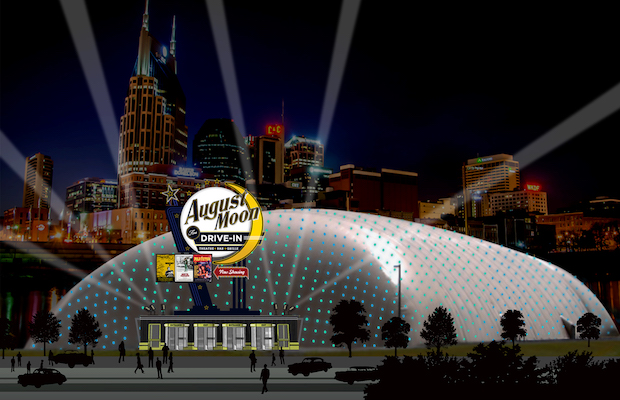 All photos via August Moon Drive-In.

Selected for our quintessentially American American city atmosphere, Nashville has been announced as the test market for a truly one of a kind new movie theater project, and one that could become a global franchise if well-received. Described as both “a mini indoor theme park” and an “indoor drive-in,” the concept, called August Moon, is not actually a drive-in at all, at least not the conventional kind you might envision. Housed in a giant dome, the theater’s environment is as much as set as the movies it will play host to, recreating the feel of a classic 1960s drive-in with antique (and stationary) cars, artificial greenery, and the appearance of a starry, August sky (you’ll even see a simulated sunset before the “moon” rises with each screening), all essentially part of a giant soundstage.

The brainchild of entertainment entrepreneur Michael Counts, if everything goes according to plan the theater will open in the spring of 2018, and will be situated at the intersection of James Robertson Parkway and Interstate 24 in East Nashville, adjacent to Nissan Stadium and just south of the forthcoming Topgolf high-tech driving range. Local entertainment powerhouse and restauranteur Ken Levitan will also be involved in the project.

Boasting the largest non-IMAX screen in North America, using advanced billboard technology, August Moon will initially show 18 screenings a week and house 350 guests, displaying both first-run and speciality fare, with tickets ranging from $8-20. The 40,000 square foot space will feature multiple full bars, artisanal comfort food (think upscale burgers and shakes), luxury seating, private event spaces, and more, and will apparently be set up to “allow live performers to engage audience members during previews and post-credits sequences.” While not explicitly announced as such, the setup seems perfectly suited to host the occasional musical event as well- epic video premiere party, anyone?

Check out some concept renderings of the space below, and expect updates throughout 2017.