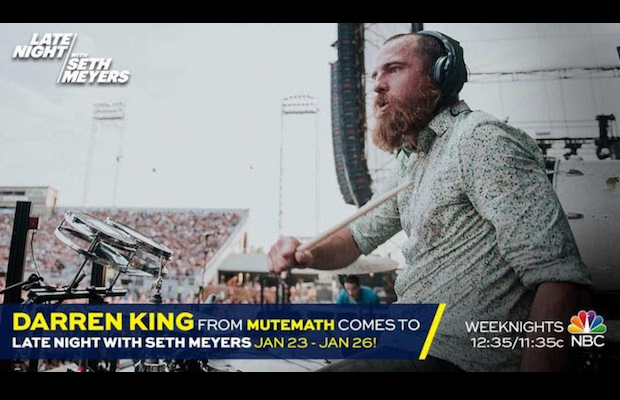 Over the last year or so, beloved alt rockers MUTEMATH have made as many stops in Nashville than in the entire proceeding decade combined, with late 2015 appearances at Grimey’s and The Basement East (where the below music video was filmed), and outings last year at both Ascend Amphitheater and Municipal Auditorium, supporting twenty one pilots and The Chainsmokers, respectively. The recent uptick in shows should be no surprise, since half of New Orleans-bred band now call Music City home, including drummer Darren King.

One of the most captivating live drummers making music today (along with being a skilled producer and multi-instrumentalist), King is set to appear all week long on Late Night with Seth Meyers, beginning tonight, Jan. 23, sitting in with The 8G Band. The show airs at 11:35 CST on NBC, Monday through Thursday, and is sure to benefit from Darren’s showmanship and versatility.

Following a surprise live, collaboration album with former tourmates twenty one pilots, MUTEMATH are currently putting the finishing touches on their fifth album, a followup to 2015’s Vitals. We expect it to arrive by the year’s end, so keep an eye out for updates!