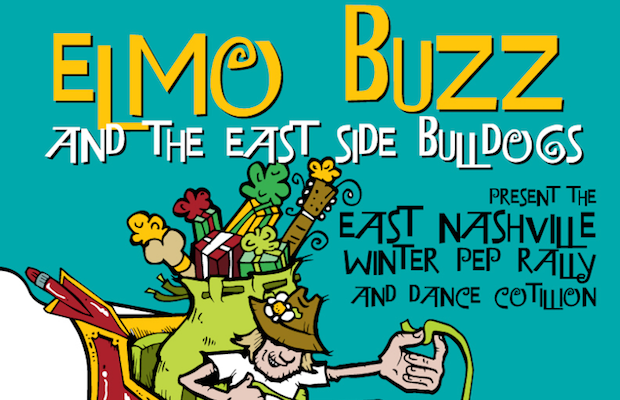 The alter-ego of celebrated local singer-songwriter Todd Snider, Elmo Buzz and his revolving backing band The Eastside Bulldogs started as a joke persona and a way to dodge radius clauses, but has evolved into a fully realized musical entity, complete with a great new album, Eastside Bulldog. Recruiting the talent of longtime friends and collaborators Elizabeth Cook, Aaron Lee Tasjan, and Rorey Carroll, Snider is throwing one hell of Christmas weekend bash, Dec. 23 at The Basement East, which sounds like a wild party for everyone staying in town for the holidays. Billed as a “winter pep rally and dance cotillion,” the shindig promises “burlesque cheerleaders, funky tomato dance contest, prizes, and a confetti canon or something sweet like that (probably)” and more, and tickets are available right here. If you’re stuck on a holiday budget, however, we’re also giving away a pair of tickets to one lucky fan, so read on to find out all about Elmo Buzz and enter below!

Winner will be announced Wednesday, Dec. 21 at 5 p.n. CST, and will receive one pair of tickets. Good luck!

[NO COUNTRY PREMIERE] ELEL Get Into the Spirit with "Christmas Time Is Here" | See Them Dec. 17 at Our Caroling Show!