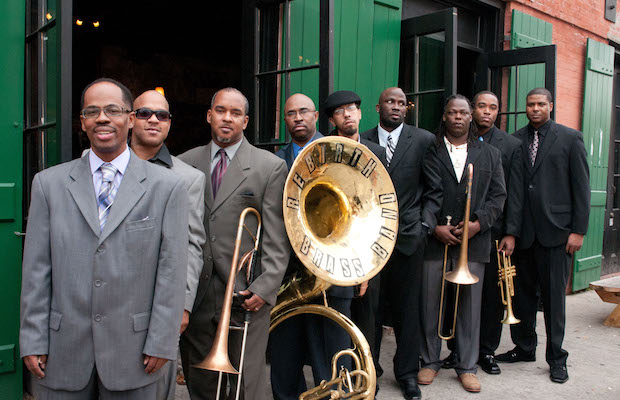 The Grammy Award winning Rebirth Brass Band are parading their way through Music City on Nov. 17, eager to share their special New Orleans brass drenched funk with audience members at 12th and Porter. Look for Chattanooga based genre bending rockers Opposite Box to open the evening of righteous tunes. Tickets to the show are currently available here for $20, but while you’re checking out the site, enter our giveaway after the jump for a chance at free tickets. Go ahead and get more familiar with the bands while you’re at it, and if you love to hear brass get funky, don’t miss this performance!

Ingrained in the roots of the New Orleans brass band tradition since their inception in 1983, The Rebirth Brass Band have become an institution. With regional jazz family ties, and rich brass bloodlines running thick amongst present and former members, it’s safe to say music is in this groups DNA (one high profile former member, Trombone Shorty, has built a legacy with his own band, while co-founder Kermit Ruffins has also gone on to become a legendary trumpeter and band leader in the Crescent City). Birthed on the streets of New Orleans, marching in Mardi Gras parades, playing theaters, and regulars at festivals like Jazz Fest, the group now tours the world, spreading the word that their home town’s music will forever ring true. Over the prolific life of the band, and with many different but always effective line-ups, RBB have released over a dozen LPs, collaborated with countless artists, won a Grammy in 2012 for Best Regional Roots Music Album, and were prominently featured in HBO’s hit show Tremé. Rebirth will forever be committed to keeping up the tradition of brass bands, while incorporating modern music, especially funk, into their live show. Be there in person to catch legends in their field, and don’t sleep on this, because they don’t come through often.

Winner will be announced Tuesday, Nov. 15, and will receive one pair of tickets. Good luck!