Music City got an extra heavy dose of creole flavored funk on Dec. 11 at Marathon Music Works, thanks to Trombone Shorty, his backing band Orleans Avenue and New Breed Brass Band kicking things off in the warm-up spot. It was a wild night of dancing, drankin’, carrying on, and just plain ol’ fun!  Read on for a full recap, and for some great shots from contributing photographer Jake Giles Netter.

Stoked to see the New Orleans based legend put it down for the second year in a row, I got to the pre-gaming early. Nearly three sheets to the wind by the time he got off work, I also talked my roommate into going, and, maybe most importantly, driving my drunk ass to the show. He’d never heard of T Shorty, but I hadn’t either last year before I covered him …. and he blew my fucking mind! Soon enough, my roommate’s skull would be just as melty. 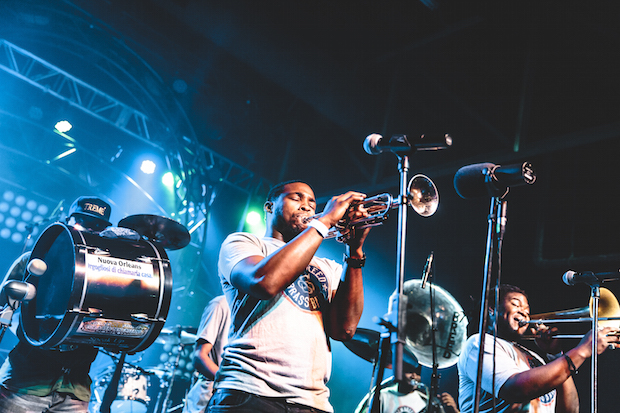 We strolled in, bobbing our heads and shoulders to the beat New Breed Brass Band was putting down. A more traditional incarnation of the second-line brass band tradition (as opposed to Orleans Avenues hodgepodge of sounds), New Breed made everyone in attendance feel like they were stomping down St Charles Ave as part of a parade or funeral procession. The tuba and perfectly timed marching drums really gives them the authentic feel that only true New Orleans natives possess. During their long, mostly instrumental brass jams, they would occasionally rap/riff into the mic to hype up crowd.

“I just want … to light one,” they repeated back to the crowd. “Do you want to party with me?” they would ask later. Indeed, we did. They even broke into a portion of Rick James’s famous weed smokers anthem, “Mary Jane”, much to everyone’s delight. All-in-all, they were the perfect performers to get us all into that ‘Nawlins state of mind. 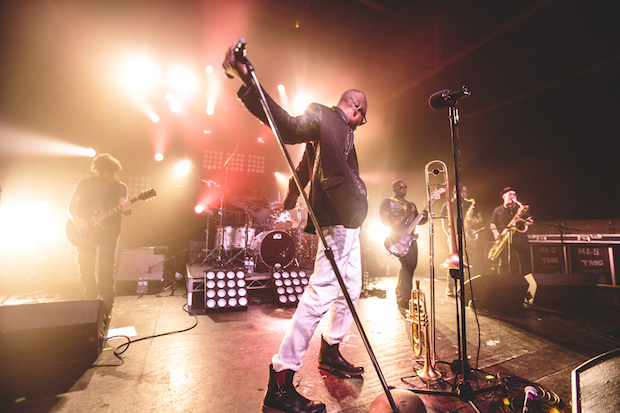 After a short break in the action and a smoke break, it was time for the main event to tear the roof off the sucker. After a massively heavy band jam to bring out the man of the hour, Shorty waved to the crowd and got right into it. Their sound was just as big, expressive, and funky as I remembered from last year, but the biggest change I noticed was a major step-up in their stage lights game. Massive strobing lazer lights of all shades and colors bounced around in tune, and took an already epic show to yet higher levels.

Equal parts rock ’n’ roll, bucket-gut blues, funk, brass band, R&B, and a dash of hip hop for good measure, there really isn’t anything these guys can’t do. Letting his lead guitarist shred as well as just about any player I’ve seen in recent memory, before sliding into powerful trombone solo himself, or stepping back to let his tenor and baritone sax players duke it out; all nine members of his band got their turn to shine and every one of us watching  were in a sweat, shaking our asses to the rhythm by the third song. High lights from a near perfect set included “On Your Way Down”, “Fire and Brimstone”, and a version of “When the Saints Go Marching In” during the encore as only T Shorty and Orleans Ave could do it.

Considering that they haven’t released an album in a few years — not since 2013’s Say That to Say This — I was surprised at how massive the crowd was. About as close to sell out as you can get, if it didn’t actually fill up completely. Almost twice as many people as last years appearance. If they keep performing like they are, especially on the festival circuit where they are already known and loved, then Trombone Shorty & Orleans Avenue will be a household names sooner than later. Check out the photo spread from contributing photographer Jake Giles Netter below, and never EVER miss a chance to get this brand of New Orleans funk in your ear.