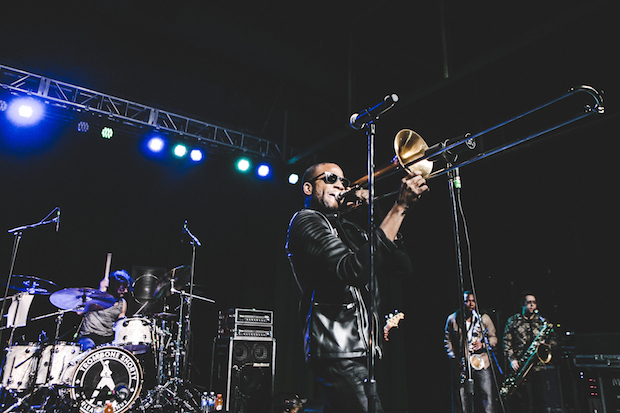 If you were looking to work off some of those extra Thanksgiving calories, there was no better place to get your groove on than Marathon Music Works last Friday for an inspired set from Trombone Shorty, and his incredibly talented backing band Orleans Avenue. People were dancing from the jump, sweating off the gravy and mashed potatoes, first with local reggae/dub rockers Roots of a Rebellion, and then Mr. Shorty and his friends. If you were out of town, or just stuck in a leftover induced coma (out for the count), get caught up after the jump, and enjoy photos from contributing photographer Jake Giles Netter.

Becoming a staple in the scene over the last four years, Roots of a Rebellion are about original as local bands come in Music City, mixing elements of jam rock and reggae with extended dub breaks. Coming in a couple songs into their set, I was happy to see them playing even tighter together than I’d remembered from previous encounters. Chatting with my photographer over some Long Hammer IPAs, we both felt some King Tubby inspired vibes. They brought out a harmonica player for the last number and jammed it out for a good fifteen minutes without pause; reggae middle Tennessee style. 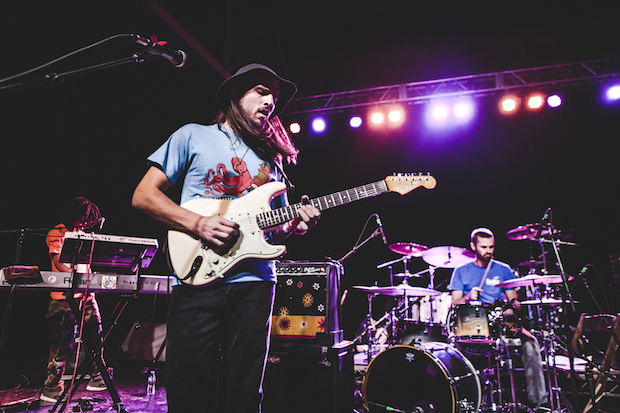 Roots of a Rebellion. Photo by Jake Giles Netter.

During the break, we talked with some of Jake’s friends, who also happen to be in the ‘biz,’ about turkey and such. The ‘biz’ of course is music, in some form or another, whether musician, publicist, blogger or promoter. It’s always nice to make new contacts, especially in a place like Nashville, where we’re all convinced we’re one hand shake away from the big time, our huge success always an inevitability. The dream does come true for some though, so just be one of the lucky ones. Simple enough. 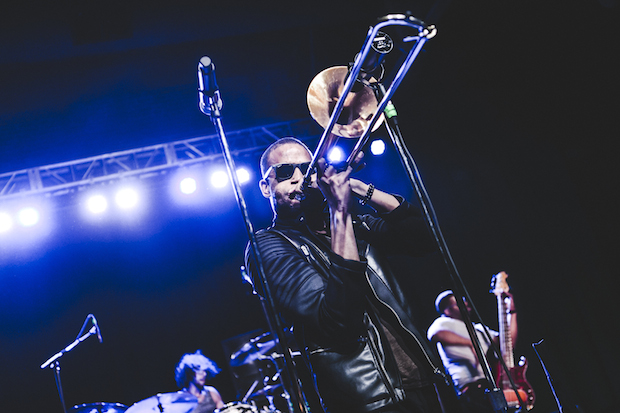 On a lark, I’d picked up the assignment to cover the show because a fellow writer had gotten held up in holiday traffic somewhere between Oklahoma City and the Ozarks. I got the call on fairly short notice, and, after a crash course on Trombone Shorty & Orleans Avenue (which consisted of listening to a few songs on Spotify), I signed myself up. He’s described as New Orleans jazz/funk influenced, but this guy’s got it all. From the first notes it was obvious that I wasn’t going to get the show I quite expected. It would run the gamut of rock, R&B, hip hop, jazz, and dance, while touching on other genres too numerous to mention. He is unclassifiable.

The band got it started, without their frontman, with some straight rock ’n’ roll riffs and brass backed instrumental jam. The sax players, a tenner and a baritone, swayed and bopped to the rhythm until he came out to augment their section with his blasting trombone and nearly equal parts his pefect pitched trumpet. They kept it instrumental for a while, everyone in the crowd jiggling their extra cranberry jelly to the beat.

During the first song break he was giving daps to the crowd, getting us all revved up and calibrated for their next set of songs. The drumming was heavy and fast, nearly heavy metal levels of thump, and the guitar and bass would come in pure hard rock. Then they’d all slow it down, and Shorty would sing a soulful R&B ballad. The way they changed gears, so smooth and effortlessly, was unlike anything I’d ever seen. They were a well oiled machine, running as tight or tighter than anyone else … and all the while T. Short was running the show, an enthusiastic orchestrator, making cues, and calling the shots within the fluid motion of predetermined, but simultaneously improvised songs. Part conductor, part MC, part singer and all brass aficionado.

After very little theatrics, they came out for an encore and the party just kept on rocking. For knowing next to nothing about him or his band before coming to their show, I was completely converted; an instant fan. Whether long-time follower, or fresh faced like myself, everyone in attendance was beaming with energy and excitement as the show crescendoed. If you missed it, for shame, but don’t worry, we have some amazing photos for you to check out. When you’re done perusing them, re-read this review and make sure you don’t miss out next time the new wave Orleans musicians come blowing through town.