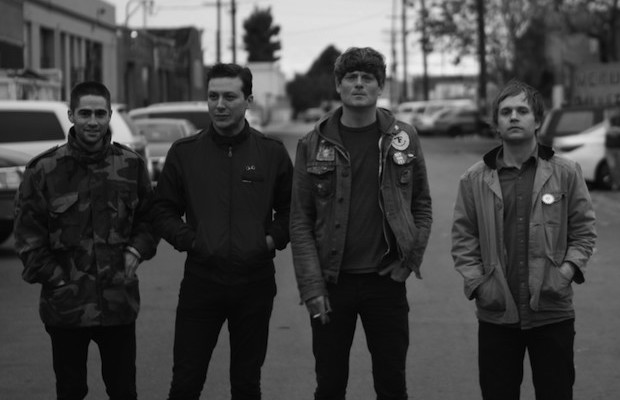 We’ve been foaming at the mouth in anticipation for this show since the summer, when Thee Oh See’s dropped their latest LP, A Weird Exits (read this post), but now the day is finally here! The California indie punk legends will be welcoming Amplified Heat, and Ron Gallo in the warm-up spots at Mercy Lounge. The music for this 18+ show starts at 9 p.m. (doors at 8), and you can still snag tickets right here, but don’t wait a moment longer, because last time they played Nashville they sold out Exit/In. Once you snag a pair, check back with us, and read on after the jump for more info on the bands. This one should be rowdy AF, so don’t push to the front unless you’re ready to mosh with some sweaty 20-somethings. We’ll be more towards the back, rocking out in our own way to one of the best bands in all the land!!

Having reached mythical status in the growing indie underground garage/psych/punk scenes (see Infinity Cat Recordings and Burger Records to name just a few), Thee Oh Sees are mostly known for two things; a prolific catalog, and, in terms of raw punk energy, possibly THE BEST live show in the scene today. It all started in San Fransisco around 1997, when founder & frontman John Dwyer started releasing experimental home recordings, after ending some successful runs as part of wild local punk bands Coachwhips & Pink and Brown. He would go on to co-found Castle Face Records, a forebearer to the indie labels we already mentioned, and began writing and performing under a revolving door of band names, including Orinoka Crash Suite, OCS, Orange County Sound, The Ohsees, and The Oh Sees, before, finally, settling on Thee Oh Sees. Through out this process Dwyer & his droogs compiled a catalog nearly twenty albums deep, including this past summer’s A Weird Exits, and it’s soon to be released companion LP, An Odd Entrances, which drops Nov. 18. Throughout the evolution of the band, Dwyer has experimented with many genres, most notably garage rock, psychedelia, noise rock, punk, and post-punk. Omnipresent on all the recordings is Dwyer’s unique distortion rich singing style, heavy guitar-pedal effects, outer space influenced ambient sound effects, and bizarre, but interesting, original cover art by the man himself. On stage he seems possessed, wearing his guitars so high on his chest they nearly touch his chin, while head banging frenetically to beat and stomping his foot in time. The current line-up, and the same one John used for the last two albums, features Tim Hellman on bass, plus dual drummers Ryan Moutinho & Dan Rincon; and, let us warn you, they pack a punch. So if a wild, hot sweaty mess of a punk show isn’t for you … neither are Thee Oh Sees and their fans packed into Mercy Lounge. Regardless, we hope to see you there, because this is one of our most anticipated shows of the entire year!

Austin, TX, based trio Amplified Heat keep things simple. They really only want to do two things; play rock ’n’ roll, and play it soul crushingly loud! “We don’t turn down … we hate monitors, we play rock n roll the way its supposed to be played … If you don’t like it, you ain’t no rock n roller!!!,” they proudly announce on their FB page, and after you give them a listen, you’ll appreciate their authenticity first hand. In 2004 they got their start, signing to Austin-based label Arclight Records, where they released their debut, In For Sin. Carrying on a long-standing tradition of kick-ass Texas blues rock, now with a psychedelic leaning, AH are the perfect way to get the crowd warmed up. Enjoy some music from their latest release, On The Hunt, below, and make sure you bring ear plugs.

Shreddy songwriter Ron Gallo has been calling Music City home since he moved here Philadelphia last year. He was originally the frontman of popular Philly band Toy Soldiers, who were very active in the beginning of the decade, playing songs that took the spirit of country music and infused it with punk rock flavors. After Toy Soldiers disbanded in 2014, Gallo started a solo career that seems to be catching on just as fast. Later that year, he released Ronny, a collection of eleven clever songs, toned back a bit compared to what he was previously known for. Earlier this year, he released the RG3 EP, marking a definitive change for him stylistically. On this release, Gallo has stripped down to the bare essentials (guitar, bass, and drums), while maintaining his insightful songwriting voice. So get there on time, to help support the local piece of this magnificent evening of tunes.