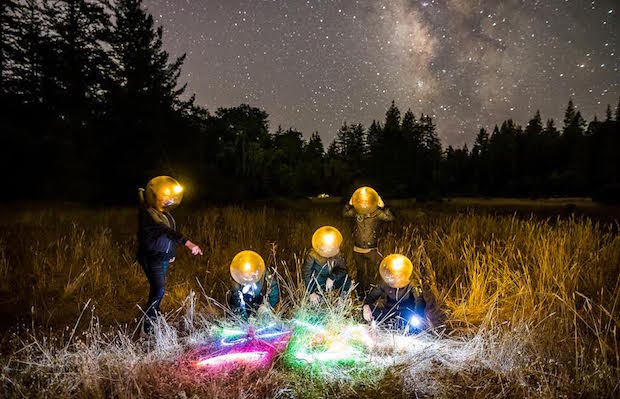 Get ready to blast off Music City, because tonight, Nov. 3 outer space electronic jammers STS9 are landing at War Memorial Auditorium, and taking all in attendance on an interstellar visual and auditory adventure. We were so excited about their return to WMA, we gave you a chance at free tickets, but if you didn’t win, there’s some good news; you can still snag tickets here. Music for the all ages show starts at 9 p.m., and if you’re into jam music and electronica, this is a must see. Don’t believe us? Read on for more info on the band, but if you go, be ready to get down to the grooves, because there will dancing a plenty.

Sound Tribe Sector 9, or more commonly just STS9 for short, often get categorized as a electronic leaning jam band by the uninitiated. However, their fans, who have often rejected this label, beg to differ. Through the band’s extensive use of electronic sounds, synth, and even sampling, plus traditional instruments like guitar and drums, a completely new instrumental sound has manifested, incorporating elements of funk, jazz, hip hop, and psychedelia. This creates vastly different performances, compared to say more stereotypical jam band acts like Widespread Panic or Phish, with a rhythm-based approach and more expansive sound. With one of the best light shows going today, the visuals are often synched to the sounds as well, creating a visual/oratory immersive experience rivaled by none. Since their start in the late ‘90s, formed in Georgia though now partially based in California, STS9 have released more than a dozen albums, including this year’s The Universe Inside, their first in six years, as well as made countless festival appearances (including five stops at Bonnaroo), and worked with Conscious Alliance to set up food banks at most of their shows for hungry families in need. Also known for a powerful stage presence, affinity for unorthodox sounds, and general attitude of playing footloose and fancy free, STS9 have amassed a large and loyal fan base that rivals most any other modern jam band. Last time they played War Memorial Auditorium, it was one of the greatest laser light shows we have ever seen, so there’s little doubt we’ll be getting any less this go ‘round. Grab tickets, and make sure you’re there to bear witness.