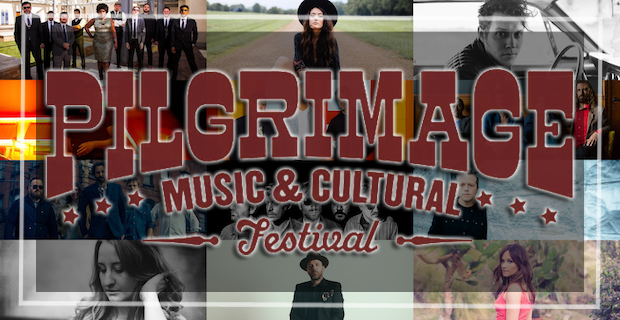 We’ve been buzzing about it for months, and the week has finally arrived, as we prepare to head to Franklin’s Park at Harlinsdale this weekend, Sept. 24 & 25 for the second annual Pilgrimage Music & Cultural Festival. We had a blast at last year’s inaugural event, and expect year two to be bigger and better in every way, thanks to an impressive lineup, even more buzz, and a year of positive experience to help streamline the event. With around 50 acts, both local and national, slated to perform across four stages over two days (not to mention a kids stage), plus local artisans and vendors, Pilgrimage is a community-rooted fest designed for music lovers of all ages and wakes of life, and we feel incredibly happy to have such a great new event in our backyard. Single day tickets and VIP options are still available here, so secure your spot if you haven’t already, be sure to download the official app, and start planning out your weekend with our handy festival guide. To get you ready to make the Pilgrimage, we’re counting down our 14 most-anticipated Sunday performers below!

Local singer-songwriter Tim Easton has been cranking out a prolific, eclectic stream of releases of years now, navigating the waters of rock, folk, alternative, and blues. Raised in Ohio, Tim spent a number of years playing in bands, moving around, and even busking in Europe, before settling in California and pursuing a solo career, eventually ending up in Music City. His recent releases have been more celebrated than ever, and he’s a versatile, entertaining live force.

WATCH | “Right Before Your Own Eyes” (Official Music Video)

With a self-described “Gulf Coast soul” sound, Houston, TX group The Suffers have managed to gain quite a bit of notoriety in just a few short years, enlisting a huge swatch of players to create a sound heavily influenced by their regional and ethnic backgrounds. Leading up to this year’s eponymous, full-length debut, the band have made several recent late night television appearances, and are generating tons of positive press and newfound attention.

A true Nashville native (a rarity, in a town full of transplants), singer-songwriter Alyssa Bonagura adopts a versatile, pleasant, and hypnotic country pop sound. The songstress caught our attention with 2012 sophomore effort Love Hard, and has since toured around the world, nabbed big placements, and collaborated with an impressive array of artists, all the while crafting some incredible new material. Step off the path and see her on the Shady Grove stage!

LISTEN | “I Make My Own Sunshine”

Easily one of Nashville’s most notable breakout artists in recent memory, soulful r&b crooner Anderson East has had a huge year, thanks to the runaway buzz surrounding his latest album and major label, Delilah. Adopting a rootsy, poppy, and Americana infused sound, East’s earnest vocals and haunting melodies make him a standout talent, and with the production help of Dave Cobb, he’s fast cementing a reputation as one of the city’s essential singer-songwriters.

Philadelphia’s Aaron Livingston, best known by his stage name Son Little, began his career more than a decade ago as “Icebird,” finding early success and collaborating with big names like The Roots and RJD2, as he managed to find an r&b-rooted, soulful sound that works will in expansive and unorthodox settings. As Son Little, Aaron released his debut LP last year, and undoubtedly stands as one of the most unique acts on this weekend’s bill.

It’s no secret that Better Than Ezra frontman Kevin Griffin, now a Franklin resident, is the co-founder and face of Pilgrimage Fest. He purposely kept his band off the bill last year, citing community and festival building as a priority, but we’re glad to see that the beloved ’90s alt rock trio made the cut this time. Dependable and self-aware, Better Than Ezra have been active nearly 30 years, and their afternoon set is sure to be a fun one!

A longtime favorite not just of ours, but of numerous press outlets across the nation, local singer-songwriter Langhorne Slim and his backing band The Law have been quietly becoming one of the most underrated bands in Nashville in recent years, fueled by unbelievable releases like The Way We Move and last year’s The Spirit Moves. Folky and soulful, Slim’s earnest rock sound and fine-tuned live show is never anything short of spectacular.

Indie folksters Blind Pilot hail from Portland, and formed just over a decade ago, initially conceived as a duo before expanding to become a sextet. Though their early efforts, as well as a west coast bicycle tour (yes, a concert tour on bicycles), helped grab initial attention, it’s the group’s third LP, this year’s And Then Like Lion, which seems destined to bring them breakout success, finding a focused, strong balance between indie pop and folk.

Something of a musical supergroup led by The Black Keys’ Dan Auerbach, partially local garage rockers The Arcs sprung up out of nowhere last year to release their stellar debut, Yours, Dreamily. They’ve been fairly active since, touring and making countless festival appearances, including a show stealing set at Forecastle Fest, but given the band members’ various other commitments, it’s unclear how long The Arcs will stay active. See ’em while you can!

WATCH | “Put a Flower in Your Pocket” (Official Music Video)

Sunday’s headliners and a fitting way to close Pilgrimage Fest’s second year, certifiable pop rock legends Daryl Hall & John Oates, who you may know simply as Hall & Oates, are at the point in their 35+ year collaborative career where they seem to know exactly what the people want, and  that’s a heaping pile of hits. Whether or not you realize it, you undoubtedly know a ton of Hall & Oates classics, and we just dare you to try not to sing along to every one of them.

Thanks to the genius one-two punch of 2013’s Southeasten and last year’s Something More Than Free, Alabama born, Nashville based Americana singer-songwriter Jason Isbell has amassed a newfound wave of critical and commercial praise, settling into something of a Ryan Adams-esque crossover figure capable of weaving between genres and penning instant modern classics. Isbell tends to play Nashville and regional fests several times a year, but with all his buzz, it’s often hard to get tickets, making this a great opportunity to see one of Nashville’s most gifted performers in action.

We can’t think of a single local artist, save for maybe Chis Stapleton, who’s had a more transformative year than Margo Price. Though she seems like an overnight success, we watched Margo work hard in Buffalo Clover and with her prior group The Price Tags, honing her chops and building her country cred, leading up to her breakout debut earlier this year, the incredible Midwest Farmer’s Daughter. SNL and Tonight Show appearances, Americana awards, festival spots, and a whole lot of critical praise later, and Margo has become traditionalist country’s biggest rising star, and one with the talent and hard work to deserve that mantle.

The solo musical vehicle of Canadian singer-songwriter Dallas Green, formerly known for his role in post-hardcore band Alexisonfire, though his solo career has garnered just as much recognition at this point, City and Colour began a decade ago as a stripped down, earnest, acoustic folk project, which has gradually transformed into an expansive, bluesy, alt rock full band outfit. With strong Nashville ties, including some local backing players, City and Colour’s Music City shows, infrequent though they are, always seem to land extra special, and it’s because of that, as well as their ability to bridge rock and Americana, that we deem their Pilgrimage set essential viewing.

An odd choice to top our list, sure, given the name of the site and all, but as we’ve told you many times in the past, we think local songstress Kacey Musgraves is a breath of a fresh air in a tired and stale mainstream country scene, and over the course of two great albums, she’s managed to pack traditionalist and outlaw country spirit into a pop accessible package. Pushing a message of acceptance and inclusiveness, Musgraves also stands as a liberal minded free spirit unafraid to buck conventions, and while she’s one of many refreshing new country singers to emerge from Nashville lately, she stands the best chance of gaining maximum exposure, potentially influencing a better crop of up and comers. Kacey, a close friend and collaborator of last year’s headliner Willie Nelson, rarely plays Nashville nowadays, making her Pilgrimage set all the more highly anticipated.