Our long-running, free Acme Feed & Seed showcase series has switched format for 2016, running monthly/bi-monthly now, but that doesn’t mean that the showcase is ever lacking in awesome local, and sometimes national, talent. For the Aug. 23 installment, we had one of the bigger crowds of the summer thanks to stellar sets from pop performer J. Human, alt rockers PHIN, and blues/Americana singing maven Stelle Amor. Unfortunately, we had a scheduling conflict with our photographer, so we couldn’t get our usual array of stellar photos.  However, you can read on for a full recap, and check out a few cell phone snaps to give you a general idea of what went down. 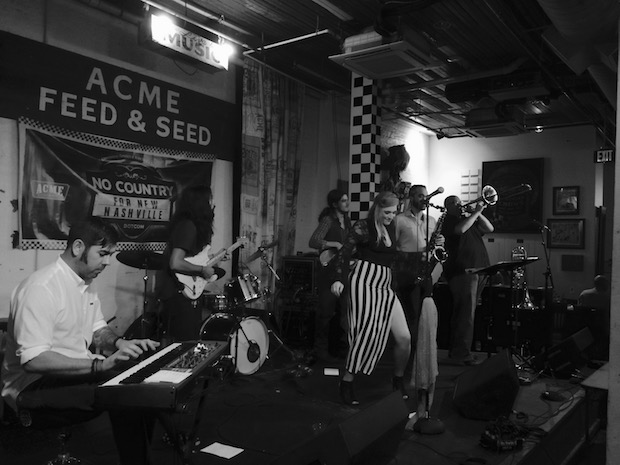 Although there was the hint of fall in the air, because the humidity was finally dropping below oppression levels, I wasn’t going to kid myself into thinking the heat of summer was over. It is Nashville after all, so if it was 77 degrees tonight, it’s bound to be 101 by tomorrow at noon. Some things I’ve just come to accept of my new hometown.

When I walked in, the usual Broadway/dinner crowd was filling Acme to near capacity, and the chatter was almost deafening. Weaving through, I made my way to the back bar, found space to breathe, and ordered a beer. The first act of the night was the smokey and soulful singer songwriter Stelle Amor, who had a massive band backing her up featuring guitars, bass, drums and a kick ass horn section. Thanks to the band, her performance had an added Americana richness, laced with some brass funk, that had everyone in the crowd tapping there toes, and eventually a few were dancing to the beat. She powered through her impressive set of all original material, including some fabulous numbers from her new EP, slated for a fall release. Besides crossing “playing Broadway” off her local musician to-do list, Stelle was also celebrating her first run of t-shirts which were available for purchase at the show. Based on her amazing set, we’re guessing she sold a few. 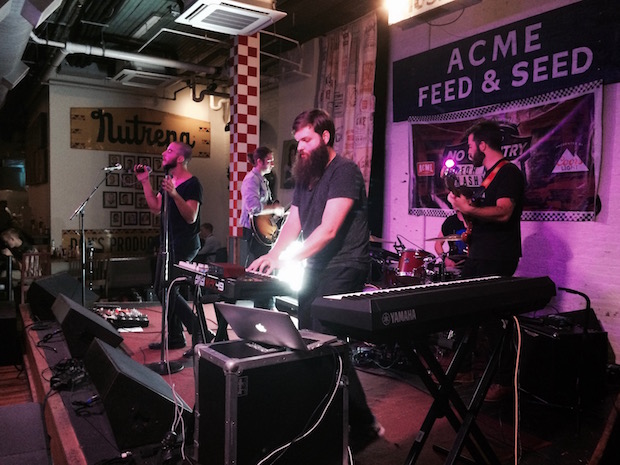 Changing gears, the second band, PHIN, was more pure indie/alt rock than genre blending. No strangers to No Country coverage, we helped the former Trevecca students debut their latest single, “Fear,” as part of their mission to release one song every month for a year, before combining the songs together as a new full-length record entitled 12 Months. Wasting little time, they rocketed into an inspired set, giving the large crowd everything they had, dripping with sweat just three songs in. In addition to the new material, they played most of their debut EP, Those Killers, including the title track, my favorite song of their’s to date. One of coolest things about this job is getting to watch Nashville bands first form and then break through. Some bands, including PHIN, take the next steps, gathering a following and getting local airplay en route to more and more success. With the talent they possess, the ceiling is very high for these local rockers. 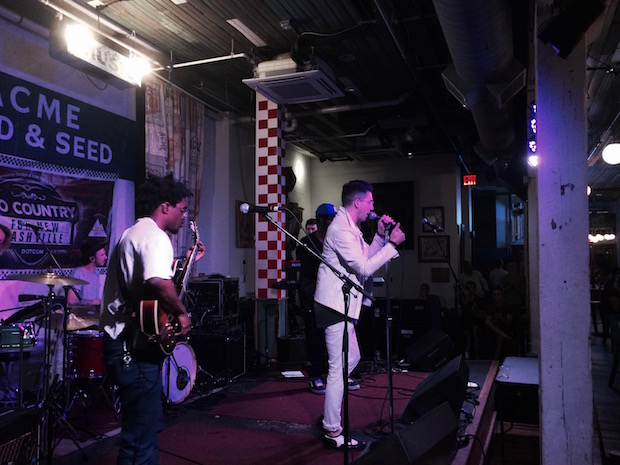 Closing out the evening of music was the very impressive J. Human. We knew him as the frontman of the now disbanded funk band Joel & The Gents. Later we found out he also has a writing deal with a major label, but at Acme it was all about his personal performance and his stellar backing band. With a Justin Timberlake flare, minus the smugness, he rocked the bar with respect, kicking the already lively crowd up two more notches with his pop inspired r&b songs. By then it was obvious that the sizable crowd of local looking young people (who’d filtered in just as the dinner crowd was leaving) were mostly there to see him. His powerful singing voice and impressive range carried a very talented pop rock ensemble. The performance was a sight to behold, and his clever lyrics were enough to get me hooked immediately. One song in particular, “Piece of Glass,” was a loosely veiled metaphor for a piece of ass, which had me chuckling. The funk break and choreographed dancing on the next number had everyone in near hysterics, and by the time he closed with another radio ready number, “AWOL,” it was obvious he could have played another hour with our undivided attention.

Alas though, he was forced to wrap it up before 11, but we can guarantee that he will be a name to watch around town. With more time together, he and his band will only get tighter and, if possible, even more in synch, and we can’t wait to see them again.