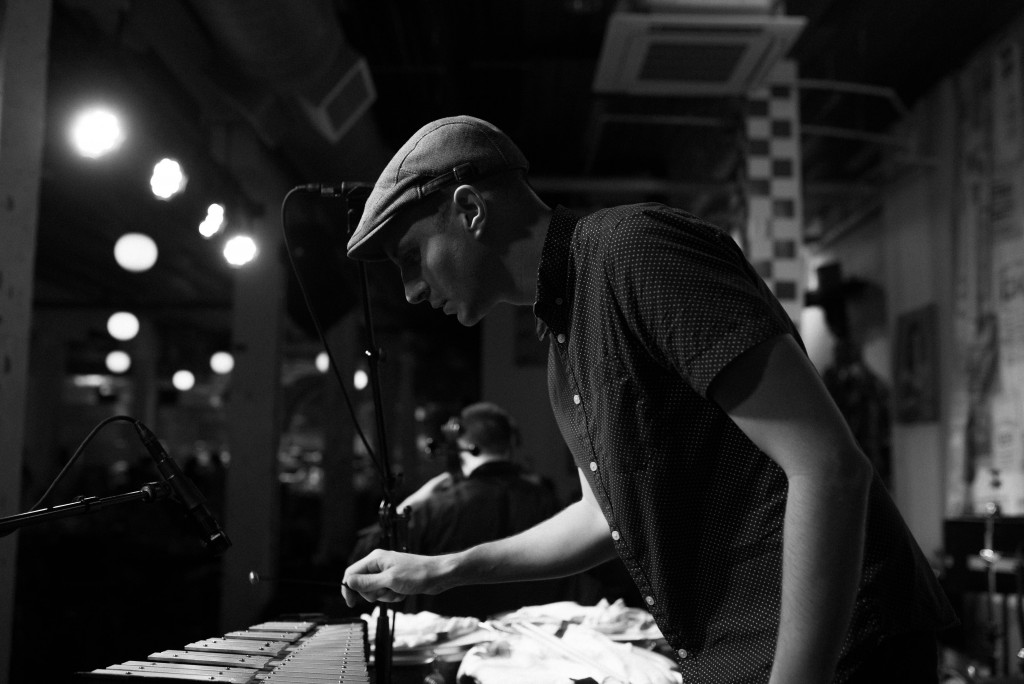 We strive to keep you informed on chances to catch our favorite local artists, and doubly so when  some of them happen to be alumni of our Acme showcase series, so we couldn’t help but notice this great lineup featuring the orchestral sounds of Birds in the Airport, indie leaning Oliver Ocean, and straight up rockers BRUNS. We’ been lucky enough to host the Birds (this post) and BRUNS (this post) before, so we know they kick ass, and based on what we’ve heard from Oliver Ocean, it’s going to be a great night of music at The East Room. The tunes for this this 21+ affair start at 8 p.m., and tickets are just $5 at the door, so price isn’t an excuse for not going out and supporting our local scene. Read on for more about the performers, and be sure to make the most of your Thursday night.

BIRDS IN THE AIRPORT

After hearing buzz around town then hosting them at our own our Acme showcase, it’s safe to say we’ve never seen a band quite like Birds in the Airport. Dubbing their sound “orchestral indie rock,” they have a fresh, craveable uniqueness, and a impressive live performance that should have all you real music lovers out there salivating at the mouth. Formed by Tom Breyfogle as a side project when he was away from home for months on end, touring with bands like Relient K (for which Tom serves as live bassist), Bleed The Dream, and Secondhand Serenade, Birds has really started to take on a life of its own, earning praise for originality within the local music scene thanks to their ability to blend classical string music with synth/guitars. The first songs we heard on how’s it going to end? were recorded alone in various hotel rooms, dressing rooms, vans, and apartments, making it feel transient, thus adding to the band’s mystique. The latest EP, Domesticated Drowsiness, further defines their sound with the help of a more polished approach. See for yourselves what has caught our attention, and don’t miss out on this one, because afterwards Breyfogle will be hitting the road with Relient K.

Indie rock outfit Oliver Ocean formed in early 2014, and ever since they’ve been hard at work crafting their own brand in the genre, with the help of ambient, jazz and Motown laced songs. At the start, the trio’s time together was spent simply playing, without jotting anything down at all. It wasn’t until several months later that they began to start moulding their best creations into something tangible. By focusing on the highlights from the improvisational jams, they were able to build chemistry quickly, and it certainly shows in their live performances, where they play tighter than bands twice their age. After seeing them perform in a couple Music City Mayhem, and Road to Roo competitions, we are eagerly awaiting a new release from one of the best local bands you may not yet have heard. The good news is you don’t have wait any longer to sample them for yourself.

Another big time Music City trio, BRUNS were born from the breakup of frontman Tim Bruns’ previous project, Churchill. After taking a little time, and nearly stepping away from music altogether, Tim relocated to Nashville (from Denver), meeting Ryan Harris Brown and Tom Whall, with whom he joined forces to develop the new project we know and love today. After hosting them at Acme, we can say for sure that their straightforward, American rock ’n’ roll sound is exactly what we need more of in a town completely over saturated in mainstream country. Pepper  folk and soul into their sound for good measure, and we can almost guarantee that BRUNS are a band you could love just as much as we do. Have a taste of their debut self-titled EP below, and be sure to get to The East Room on time to check them out live.

Birds in the Airport, Oliver Ocean, and BRUNS will perform tonight, Aug. 25 at The East Room. The show is 21 +, begins at 8 p.m., and tickets are available for $5 at the door.