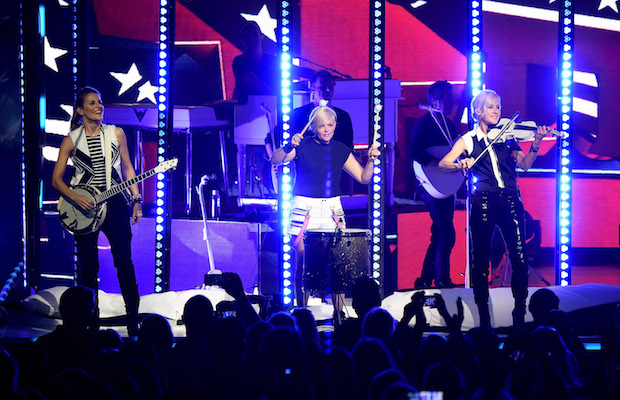 Review by Mary-Beth Blankenship and Philip Obenschain. Photos by Kevin Mazur for PMK.

It’s been almost exactly a decade since beloved country trio the Dixie Chicks last played Nashville, also at Bridgestone Arena, though at the time called the Gaylord Entertainment Center. The Grammy winning Texas group, an astounding 25 years into their career at this point, never formally disbanded, per se, but became largely inactive throughout the ‘00s, intermittently returning to the stage in recent years, before mounting their current DCX MMXVI full comeback tour. Nashville is the town that largely helped launch their career, and propelled them to massive commercial success in the ‘90s, so, despite not being their true hometown, the band’s return to Music City still feels like something of a homecoming. Greeted by fervent fans of all ages and walks of life, the gals’ Bridgestone performance was as triumphant, socially charged, and epic as we ever could have imagined, and, despite falling squarely into the realm of country, they stood in stark contrast with the industry’s mainstream establishment and stale ideals, proving that, after all the years, the Dixie Chicks are still as unrelentingly individual and defiant as ever. Read on for our take on their electrifying return!

While a sea of country fans donning boots and western attire is no unusual site in downtown Nashville, the crowds we typically encounter at Bridgestone Arena, whether for sporting events or concerts, are generally a bit more diverse than those walking down Broadway; for this show, not so much. Though, by popular country standards, the Chicks’ audience is a bit more varied and liberal than the norm, its makeup was still overwhelmingly female, and overwhelmingly and unabashedly country, serving as a reminder to just how popular and impactful the group’s run has been, even if they’ve cooled off in recent years. Nashville’s own Smooth Hound Smith, a delightful, folky, bluesy, and roots duo from the east side, who we’ve told you about quite a few times in the past, had the honor of warming up the stage. Though likely the biggest show they’ve ever played, they maintained a confidence and poise throughout their lean set, and, while many of the out of towners seemed unfamiliar with their music, they still commanded the attention of the swelling crowd, setting the bar high for the amazing night of music. After a quick changeover, soulful LA blues rockers and longtime site favorites Vintage Trouble cranked up the energy even more, flexing their retro rock appeal and eliciting dancing and exuberance as the fast-filling audience awaited the evening’s headliners. Perhaps ironically, they dedicated “Another Man’s Words” to all of “the heartbroken men in the audience,” which seemed fair, as the badass ladies who would soon follow brought every range of emotion from their own perspective. 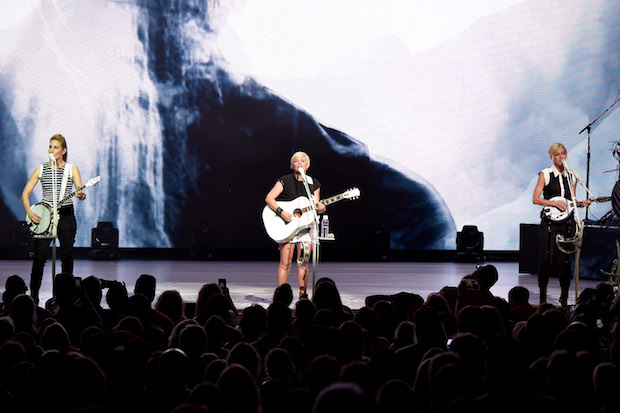 If you’re even remotely familiar with the Dixie Chicks, you’re surely aware of their infamous 2003 comments about then President George W. Bush, which, in ideological opposition to the conservative country establishment, derailed their career, and arguably served as the catalyst for their waning activity in the decade that followed. While the fallout of their stance was surely frustrating, the trio, and especially outspoken lead vocalist Natalie Maines, have never seemed to actually regret the sentiment, and, throughout the years, have continued to champion humanitarian, social, feminist, and liberal causes unrelentingly. The fact that it dented their career simply as a byproduct of their genre, while acts of the same era such as Green Day profited off of similar views by virtue of being “punk,” made Dixie Chicks’ social crusades all the more sincere and admirable, and their reemergence comes at a time when not only does the world need brave souls willing to fight for what’s right, and work to wield influence over those who might be opposed, but also at a time when the country scene has finally begun to change for the better, a product for a more open-minded and socially conscious up and coming generation. We had no doubt the group’s outspokenness would be just as prevalent as their wonderful music, and, while waiting for them to emerge, ads for LGBT rights groups and justice reform organizations, along with Planned Parenthood literature in the lobby made it clear that these are the same Dixie Chicks we’ve long admired. 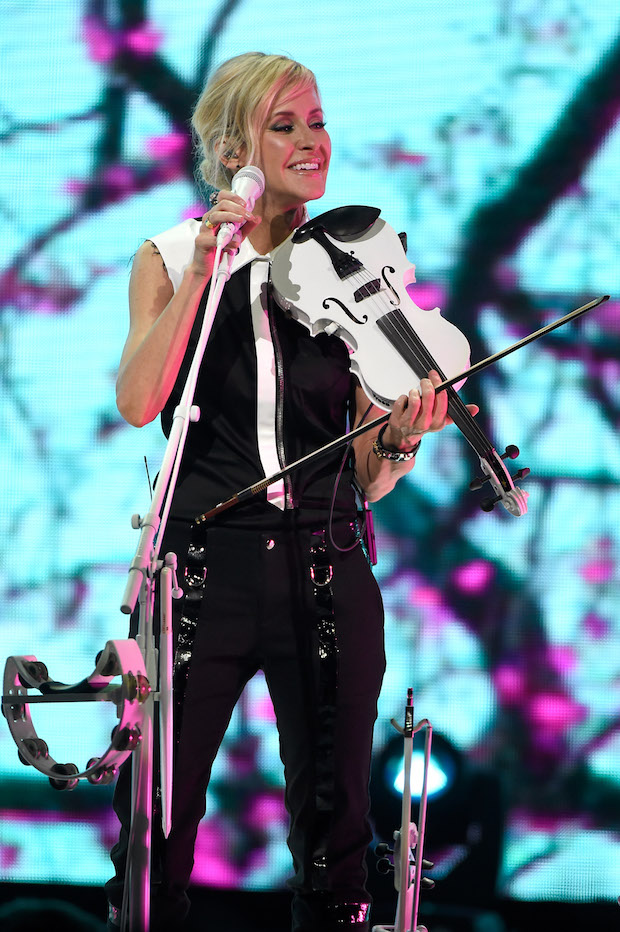 Production was surprisingly minimal, as the band emerged, decked out in black and white and looking absolutely ecstatic to be in Nashville, taking their spots on a largely empty stage, and in front of a gigantic, video-controlled backdrop. Opening with “The Long Way Around” and “Lubbock or Leave It,” both “newer” cuts, it really sunk in that it’s been 10 years since we last got a Dixie Chicks album. The passage of time seemed to be not only on our mind, but theirs as well, as they reelected on how they’ve changed, musical milestones, and their extended absence with quips throughout the evening. With accompaniment from a skilled backing band, they seamlessly blended their layered, diverse instrumentation, fusing traditional and contemporary, acoustic and electric with masterful skill. It’s the girls’ unbelievable voices, though, and perfect harmonies that help set them apart from the bulk of their country peers, sounding flawless and effortless so many years in, the passage of time treating the band more like a fine wine than an aging musical act. Covers have long been a part of the Dixie Chicks’ repertoire, but, in addition to the ones we know so well, they snuck in a few brand new takes, including a goosebumps-inducing tribute to Prince, with a take on “Nothing Compares 2 U” that would give Sinead a run for her money, along with an unexpected acoustic rendition of Beyonce’s “Daddy Lessons,” which Maines introduced by mentioning she had bonded with Zack from Smooth Hound Smith over Lemonade. Natalie’s chemistry with bandmates Emily Strayer and Martie Erwin, sisters and skilled multi-instruments, defies classification, and their honest and genuine approach, mastery of their craft, and unbelievable versatility places them in a place of their own. 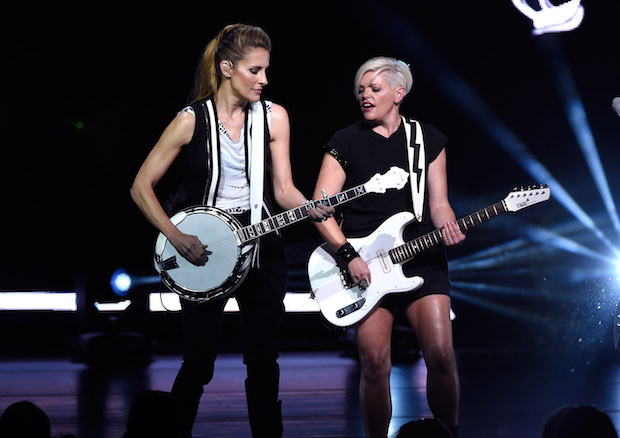 Standout moments included “Goodbye Earl,” the group’s anthem of overcoming abuse, during which they flashed visuals of infamous violent and abusive figures like Chris Brown, O.J. Simpson, Robert Durst, and even a devil-horned Donald Trump. Though politics didn’t play as heavy into the night as expected, “Ready to Run” also conjured imagery lampooning the current political landscape, and their anti-Trump stance was reinforced with clips of steaks inscribed “Drumpf,” in reference to Jon Oliver’s attempt to lampoon the candidate. After a black and white video montage and quick changeover, which Natalie called a first, joking that they went from “black and white to white and black,” the full band joined for a number of stripped down acoustic tunes, including a touching cover of Patty Griffin’s “Don’t Let Me Die in Florida” and the aforementioned Beyonce song. Culminating in an instrumental bluegrass jam with the girls alone, the Chicks flexed their eclectic taste by peppering in samples of The White Stripes’ “Seven Nation Army,” Beyonce’s “Single Ladies,” and more. Of course, the biggest crowd response of the night came from the biggest singles, and their career-defining cover of Fleetwood Mac’s “Landslide” not only managed to uplift and energize the whole room, but also served as a fitting reflection for the passage of time, prompting remarks from Natalie about how in the 15 years since they’ve had children and grown and aged, really relating to the line “I’m getting older too.” 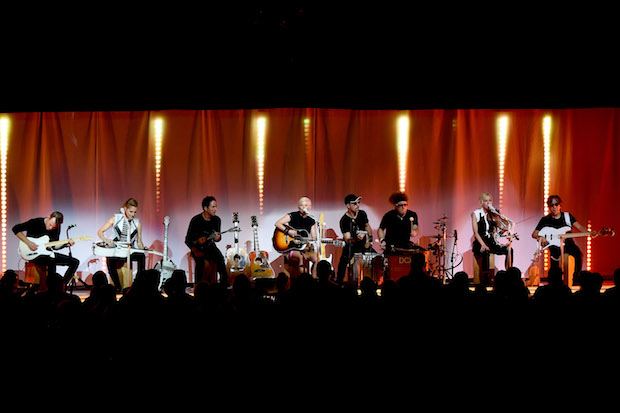 Shedding their most conventional country material, the night focused largely on big hits, covers, and pop geared tunes, clearly satisfying the enthusiastic crowd and conjuring huge singalongs, nostalgic reflection, and joyful celebration. Coming to a close all too soon, the band managed to pull a final surprise, inviting what appears to be a Chippendales dancer on stage with a huge cake in honor of Emiliy’s birthday, before returning for a pleasant encore of “Not Ready to Make Nice” and a cover of Ben Harper’s “Better Way,” ending the night with a singalong set to a visuals of rainbow heart, advocating LGBT pride. A perfect suitable ending for a band with so many facets, Dixie Chicks’ return to Nashville began with high expectations and surreal elation, and ended with hope, optimism, full hearts. We’ve needed the Dixie Chicks as much as they’ve needed us, it seems; as Maines’ proclaimed “I hope it doesn’t take 10 years for us to come back” we found ourselves screaming “Us too, Natalie. Us too.”