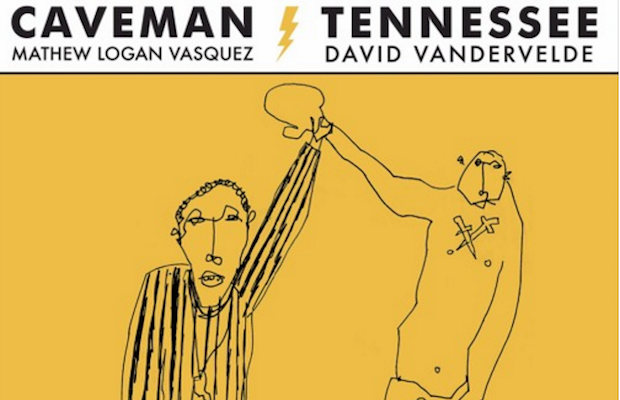 The last time we checked in with local label Cosmic Thug Records, they were dropping a 7-inch split with featuring members of Deer Tick, Diamond Rugs, and Ravi Shavi.  Unlike the indie rock and fuzzy psych rock singles from that last effort, they have turned things up a notch with another official release today.

The A-side, “Caveman,” is Matthew Logan Vasquez (Delta Spirit, Middle Brother), who just released his debut full length, Solicitor Returns, earlier this year and toured in support.  Unlike his solo work, which evokes thoughts of Neil Young, Vasquez digs deep into his inner rocker to unleash a distorted thrashing for this Cosmic Thug release.  MLV aptly describes the track, which was recorded during the Solicitor Returns sessions, as “a song about being a base human.”

The B-side single, “Tennessee,” features local transplant and multi-instrumentalist David Vandervelde, who found time to record this single despite touring on guitar with Father John Misty and his work as half of Tess & Dave.  “Tennessee,” which was recorded with Cosmic Thug honchos Adam Landry and Justin Collins, features a more recognizable poppy indie rock take, which Vandervelde describes, “‘Tennessee’ is about taking care of your friends.”

With each new unique 7-inch release, their work with national and local artists, and their personal projects, Cosmic Thug Records is quickly making a name as one of the most noteworthy operations in the local scene, and a relevant player nationally.  Head below to get a taste of these exciting new singles, which are available digitally and on vinyl today.