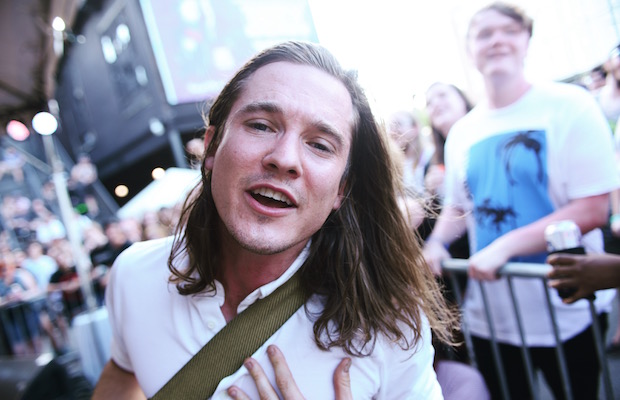 Hot off of standout performances at this weekend’s Wrecking Ball festival in Atlanta, self-proclaimed punk celebrity and all around fun guy Chris Farren, best known for fronting Fake Problems and Antarctigo Vespucci, is out in support of his forthcoming debut, solo full-length, a gleefully poppy and lyrical earnest effort that is likely to be on of the year’s best releases. Along with up and comers Broken Beak, another Wrecking Ball standout, and locals Banana Frequency and Slow and Steady, Farren is set to perform tonight, Aug. 15 at Cafe Coco, for an all ages punk show that will without a doubt start your week off right. Tickets can still be had for just $12, so snag yours now and read on for why you don’t want to miss this!

Best known for fronting poppy, indie, emo rock group Fake Problems since 2005, as well as for his side project Antarctigo Vespucci with Jeff Rosenstock, sarcastically self-proclaimed punk celebrity Chris Farren has flirted with solo music here and there in form of EPs and Christmas tunes, but he’s finally prepping to release his first full-length, Can’t Die, next month, Sept. 2, via SideOneDummy! Unlike his other musical ventures, which have at least been somehow rooted in pop punk, Farren’s solo effort, as indicated by infectious first single “Say U Want Me,” unabashedly lets his indie pop tendencies fly, citing Coconut Records, Belle & Sebastian, and Magnetic Fields as musical influences. The juxtaposition of upbeat, bright songs with deeply personal and sometimes dark lyrics makes Chris’s sound all the more compelling, and his hilarious, endlessly fun demeanor has earned him a reputation as one of the most likable guys in punk. Even if you’re not familiar with his music, there’s a good chance you’ve seen his contributions to the apparel world, which have become something of a viral hit. Farren was a highlight of this weekend’s Wrecking Ball festival in Atlanta, and we can’t recommend catching this rising talent in person tonight!

What originally started as a solo vehicle for frontman Beau Brynes, a Philadelphia visual artist known for his work with bands like Have Mercy and Weatherbox, relative newcomers Broken Beak have since blossomed into a full band, and one that count Brendan Lukens, known for co-fronting breakout fellow Philly group Modern Baseball, as a guitarist. Following more lo-fi early efforts, the band recently released their debut full-length, Some Nerve, produced by another Modern Baseball member, Jake Ewald, and are fast garnering praise from the indie press. Brynes’ reflective and story-driven lyricism coupled with his raw and earnest vocal style help give this band a unique identity, and, though emo-adjacent, they seem to be just as inspired by indie rock with a touch of garage and power pop flair. Their LP is a definite hidden gem amidst the 2016 musical landscape, and if you haven’t yet discovered this band, we seriously recommend giving them a spin.

Local trio Banana Frequency are so new that we actually can’t tell you a lot about them, but from the sound of their one live demo (below), their upbeat, earnest, fuzzy style of pop punk will fit right in. Show up early to show a new local band some love!

Nashville based via Austin, Slow and Steady is the musical vehicle of talented singer-songwriter Jacob Lawter. Channeling influences of classic emo, early ’00s pop punk, and melodic indie rock, on his debut LP, In Time We Belong, released last year, Lawter managed to pack an emotional, sad, and earnest lyrical gut-punch backed by dynamic, dissonant, catchy, and tastefully sparse instrumentation. Part of Nashville’s often overlooked but thriving indie punk and emo scene, Slow and Steady are an act that should be in your life and in your eardrums immediately, and if you’re going to the show tonight, make their set a priority.

Chris Farren, Broken Beak, Banana Frequency, and Slow and Steady will perform tonight, Aug. 15 at Cafe Coco. The show is all ages, begins at 7 p.m., and tickets are available for $12.

The Head & The Heart Premiere "Colors" Ahead Of New LP