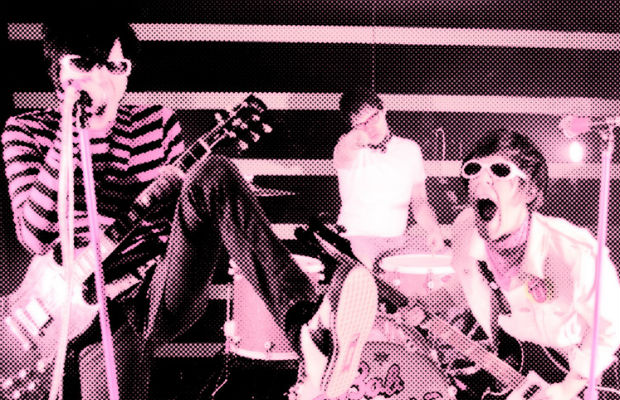 As we told you weeks ago, local rockers The Pink Spiders will reunite at Mercy Lounge on Saturday, Aug. 6 with their original lineup to celebrate the 10 year anniversary of their major label debut, Teenage Graffiti. The 18+ show gets started at 9 p.m., and, as of our writing, $10 tickets are still available, but we are likely to sell out. Make sure you get there early for our pals Tesla Rossa, scheduled to get the party started, and stay late to hear a huge catalog from one of Nashville’s biggest rock acts of the mid 2000s.  Read on for the full story, and grab your tickets here!

Before Nashville was the “it” city, The Pink Spiders flirted with being Nashville’s “it” band.  They were buzzing when you still had to slink way down Dickerson for hot chicken, and there wasn’t even an iPhone with GPS to give you directions.  It’s been a tumultuous road for the Spiders to say the least, but, it was a gold paved road to success for the band in the early ’00s.

Back in 2003, local, and still present-day scenesters, Matt Friction (guitar, vocals), Bob Ferrari (drums), and Jon Decious (bass) came together with the idea for a power pop band, and left the other projects they were working on to create The Pink Spiders. Within only a few months, they self released their debut EP, The Pink Spiders Are Taking Over, and immediately began to catch ears with their almost tongue in cheek, over the top power pop.

However, unlike many local bands that work their way up from basements, they leveraged local booking connections to reach further and higher on their tours, and quickly became a bigger name outside of Nashville than within a much different Music City scene at that time.  While touring, they caught the ear of an independent label (C.I. Records in Lancaster, PA), which released their debut full length, Hot Pink, in 2005.  And, keeping their thumb firmly on the nitro button, they landed a private major label showcase that same year at LA’s famed Viper Room, where they were overwhelmed with an unbelievable 11 record deal offers, and ultimately chose Geffen.

With the glare of impending success in their eyes, the group left Nashville for Los Angeles, but were soon shuttled off to NY to work on their major label debut LP Teenage Graffiti, with former Cars frontman Ric Ocasek at Electric Lady Studios, whose production credits include Weezer, No Doubt, Nada Surf, and Bad Religion.  However, high-profile celebrity encounters aside, things started to go wrong.  The group lost control of their sound, and were shunned in decisions on the record.  They went from their power pop trademark sound to a brand of pop punk that just didn’t fit into the band’s ethos, which ultimately left them straddling the two genres like a boat slipping away from a dock.  It was clear that relationships were already straining, and a challenging summer on Warped Tour and a delayed album release seemed to doom the “can’t miss” band before they even truly got their start.  The turmoil that followed ultimately led to the Spiders’ untimely demise.

Geffen, still desperate for a winner after lackluster (by major label standards) sales of the debut, pushed lead songwriter Friction hard to pen songs on the followup which remained on their contract, but ended up pulling the plug before its release.  Friction decided to self-release Sweat It Out, and toured with what he referred to as a “Pink Spiders cover band,” before ultimately taking a hiatus in 2009.

The band have poked their head above water a few times since with a smattering of singles and a handful of shows under various lineups in the years since, and, amazingly, the original members remain friends.  However, the Spiders have largely “reclused” in East Nashville while working on various side gigs since.

Given the rarity of seeing The Pink Spiders play anymore, the show at Mercy Lounge on Aug. 6 is a must attend.  It is sure to be a nostalgic night of music and fun from the original lineup, and who knows, you might just hear a new song to make you pause to wonder if they’ll give it another go.

A long-time site favorite, Tesla Rossa grabbed our attention a few years back, wowing us with each early single and dropping one of our favorite local releases of 2014 in their debut LP. The band have been keeping busy ever since, touring and performing around Nashville on a regular clip, and debuting a new EP, Heat Bath, late last year. Though they’re more alternative, garage, and indie geared than The Pink Spiders’ unabashed power pop, they still meet in the middle in terms of energy and huge hooks, making them a well-suited choice to get this show started.