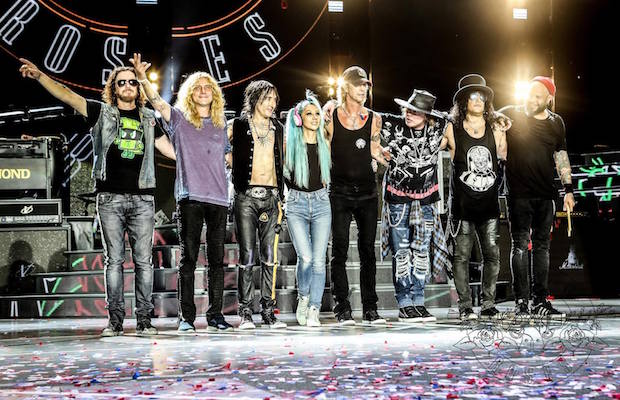 While Guns N’ Roses never official disband in their 30+ year run, the legendary hard rock group haven’t felt whole since the ’90s, when a string of departures would leave only frontman Axl Rose as the band’s sole original member, left to carry on with a revolving door of players, while GnR’s legacy slid to become something of a former shell of itself. That’s why this tour, a reunion of the the core trio of the group’s classic lineup (Rose, Slash, and Duff McKagan, with a chance that original drummer Steven Adler might pop in as well), has helped GnR roar back to life, garnering their best reviews in years and suddenly ascending back to major festival headliners and stadium-sized performers. The band’s epic Not In this Lifetime tour, which we first told you about months ago, hits Nashville’s Nissan Stadium tonight, with support from breakout local country singer Chris Stapleton. If you’ve been following along with this run, then you already know, the hype is real, and this is undoubtedly the best, most definitive version of GnR you could possibly hope for. An abundance of tickets still seem to be available, though, if you don’t want to go the re-sale route, we’d suggest checking out the box office, which, like the parking lot, opens at 3 p.m. Gates are slated to open at 6, with music at 8. Remember, this is a huge venue, so plan to arrive early and pay attention to Nissan’s policies. If you’re even a casual fan and you’ve been dragging your feet, read on for more about why this is sure to be a show you won’t soon forget.

Seminal hard rock group Guns N’ Roses erupted onto the scene in the mid ’80s, formed by members of two other Los Angeles acts, Hollywood Rose and L.A. Guns. A short and well-received stint around local clubs swiftly landed the band a major label deal, and their 1987 debut, Appetite for Destruction, catapulted the group to rock and roll superstardom. Rising to prominence in a time when metal ruled the land, GnR benefited from less glam and hair metal decadence than many of their contemporaries, and, as such, managed to largely weather the scene’s early ’90s decline. Considered one of the best rock albums of all time, Appetite is also the band’s best known and most commercially successful, moving some 30 million copies and cementing their legacy in rock history. Pseudo-sophmore release G N’ R Lies (kind of an EP/live/acoustic mashup) arrived a year later, but it was a pair of releases in ’91, Use Your Illusion I and Use Your Illusion II, that really provided a proper followup, and reasserted GnR’s relevance and dominance amidst a fast-changing musical landscape. Already facing inner turmoil and beginning what would be a long-standing trend of cycling through members, 1993’s “The Spaghetti Incident?” would mark the last collaboration between Rose, lead guitarist Slash, and bassist Duff McKagan (original drummer Steven Adler and rhythm guitarist Izzy Stradlin departed before and after Use Your Illusion, receptively), and would bookmark a decline after six years of massive success.

Guns N’ Roses never “broke up,” per se, but after the band’s classic lineup dissolved, Rose (and keyboardist Dizzy Reed, who joined in 1990 and has been a permeant fixture since) employed revolving door of players, touring intermittently under the GnR banner, and producing only one album in the last 23 years, 2008’s poorly-received, infamous Chinese Democracy. That’s why, when earlier this year, news broke of a “classic” GnR reunion, beginning with a pair of shows in Vegas and a subsequent headlining spot at Coachella ahead of a national tour, fans lost their minds. While the reunion only officially includes Duff and Slash (Reed, along with tenured guitarist Richard Fortus and drummer Frank Ferrer, plus additional keyboardist Melissa Reese, round things out), it still marks the trio’s first time on stage together in 23 years, and has seemingly reinvigorated the band, drawing some surprisingly stellar reviews after decades of mixed reception. Inexplicably, Stradlin is not part of the run, despite being on good terms with everyone involved, but Steven Adler made a surprise appearance at the tour’s last stop, his first time on stage with the band in 26 years, giving us hope for a Nashville repeat. While it hasn’t exactly been impossible to catch Guns N’ Roses over the years (they even played Nashville last less than five years ago), this is about as definitive a version of the band you’re going to get, and if reception so far is any indication, they’re the best version of GnR you could ask for in 2016; whether they’re on your bucket list or you’re an OG fan, this is the best time you could possibly see them in action. Don’t miss it!

Perhaps the biggest country music success story in recent memory, to say Nashville-based, Kentucky bred singer-songwriter Chris Stapleton has had a huge past year would be an understatement. Raised in the small town of  Staffordsville, the son of a long line of coalminers, Stapleton moved to Nashville in his early ’00s to purse a career in music, soon becoming the frontman of bluegrass band The Steeldrivers, with whom he found some moderate success before departing in 2010. A short-lived southern rock band would would follow, though Stapleton mostly found success and acclaim through co-writes with other artists, before refocusing on his solo career and crafting his full length-debt, Traveller, released last year and co-produced by Dave Cobb.

Met with immediate critical acclaim by the country community and music world at large, Stapleton has been praised for his old school, revisionist style, personal songwriting, and authentic sensibilities; something of a breath of fresh air in a mainstream country landscape that has been largely overtaken by pop country artists. The general public outside of the country world immediately fell in love with Chris after his debut with Justin Timberlake at the CMAs awards, and his sweep at that show, The Grammys, and ACMSs, and more has been lauded as important paradigm shift in mainstream country. Since rising to fame, Chris has appeared on numerous television shows, including an amazing SNL outing, and has risen to become an in-demand festival performer, appearing at countless high-profile outings worldwide. He’s an oddball amidst GnR’s eclectic batch of openers, but he’s uniquely suited to dazzle in his adopted hometown.