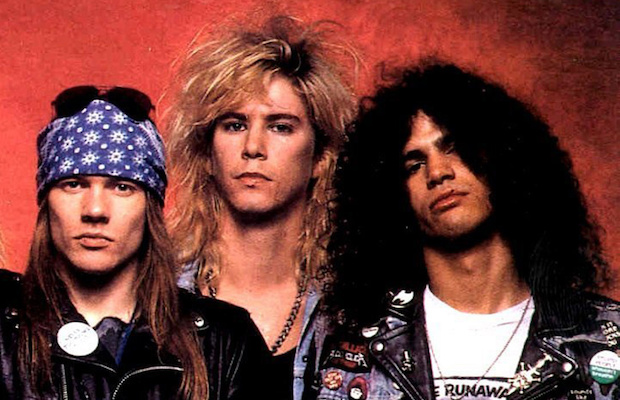 While seminal ’80s hard rock group Guns N’ Roses never “broke up,” per se, the band’s classic lineup dissolved throughout the ’90s, leaving frontman Axl Rose to lead a revolving door of players, touring intermittently under the GnR banner, and producing only one album in the last 23 years, 2008’s poorly-received, infamous Chinese Democracy. That’s why, when earlier this year, news broke of a “classic” GnR reunion, beginning with a pair of shows in Vegas and a subsequent headlining spot at Coachella, fans lost their minds. Somewhat bittersweet, the reunion includes only guitarist Slash and bassist Duff McKagan alongside Rose (rounded out by more recent GnR recruits), notably omitting guitarist Izzy Stradlin and drummer Steven Adler (long-running keyboard Dizzy Reed, who joined the band in 1990, is also still in the mix, though he’s generally not considered one of the classic five). Still, the sight of Slash and Axl on stage together for the first time in 23 years should be enough to delight die-hards, and, as long suspected though formally confirmed in a teaser video this morning, the legendary group will be taking the show on the road this summer, for a 21-city North American run (separate from already-announced outings in Vegas, Mexico, and Coachella) which includes a stop right here in Nashville. So far, only cities have been teased, without specific dates, but rest assured, we’ll be here to fill you in as soon as we know more. Relive classic GnR below, and check out a full list of cities after the jump!