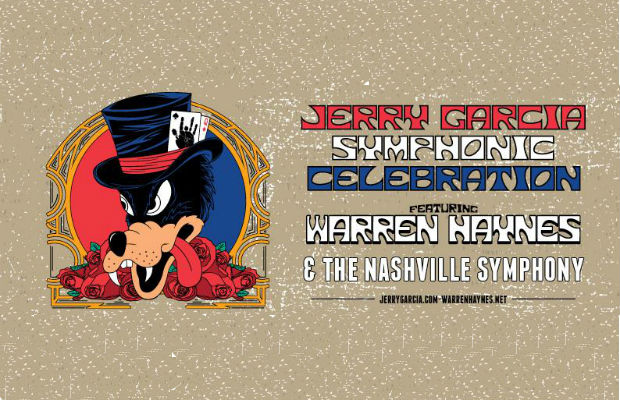 Well that’s it, Bonnaroo is over. The hangover lasted a week, but it’s finally time to get back out there. And, coming up at the Schermerhorn Symphony Center is an extremely special and unique opportunity, especially for those of us that reveled in the glory of Dead and Company’s amazing Sunday night headlining Roo set. Renowned guitar virtuoso Warren Haynes will make a stop in Nashville as part of his Jerry Garcia Symphonic Celebration tour.

This isn’t the first time that Haynes has embarked on a venture inspired by the world renowned jam-rock band. The artist has spent a lot of his recent career years honoring the late Grateful Dead guitarist, touring with original members of the Dead, and now bringing this endeavor around the country. The show starts at 7:30 p.m., and tickets are still available from $22 – $79. If you are a fan of the dead or just rare opportunities to see unique shows, it would be in your best interest to check this out tonight. You won’t regret it.

Warren Haynes first started this project in the summers of 2013 and 2014 (taking a break to tour in support of his 2015 album Ashes and Dust), and is bringing the Symphonic Celebration back for another round this summer. The premise of the event is that Haynes tours around the country and at each stop pairs up with the symphony located in that city, where the two join forces for a unforgettable evening that honors one of the greatest guitar players and songwriters that this world has ever witnessed. What is so special about this is how Haynes pours his southern soul background into the show and it is met with the distinguished nature of each symphony to form a meshing of two opposite sides of the musical spectrum.

This will truly be a magical night for any DeadHead. Warren Haynes will be playing Garcia’s signature custom-made guitar known as “The Wolf,” and the lineup will also feature former Jerry Garcia Band vocalist Jackie LaBranch, Jeff Sipe on drums, Lincoln Schleifer on bass, and Jasmine Muhammad also on vocals. Haynes assures the DeadHead community that each performance will approach the symphonic arrangements in a “non-traditional manner” that in the true spirit of the Dead will make room for extensive improvisation. This may not be the last time that Haynes decides to bring this tour out, but since the man is a jack of all trades, you never know what he will be up to next. If you are a fan of the Dead, you better see this while you have the chance.

Warren Haynes and The Nashville Symphony will celebrate Jerry Garcia tonight at the Schermerhorn Symphony Center. The show is all ages, begins at 7:30 p.m., and tickets are available for $22-$79.