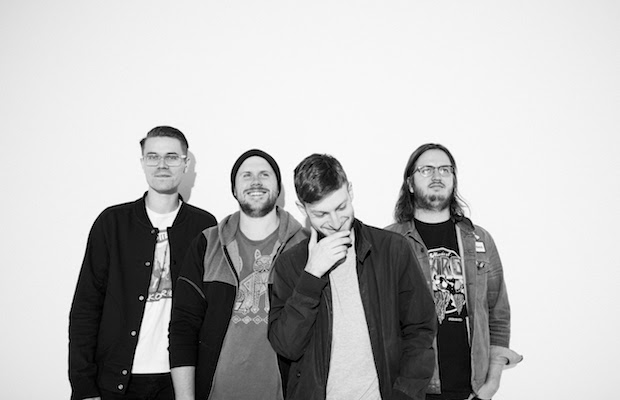 Celebrating the release of critically-lauded sophomore album, The Dream Is Over, Canadian indie punks PUP return to Nashville this Saturday, June 18 at their buzziest, amidst a tour that is selling out all over the country. Joined by Rozwell Kid, who we’ve told you about before, and exciting up and comers Pkew Pkew Pkew, this is not only the most exciting show of the weekend, but perhaps our most-anticipated rock show of the whole summer, showcasing three important bands in the midst of their well-deserved ascent to broader rock recognition. Making things even more exciting, DUCK (DJ Chips ft. Young Manchego [of Diarrhea Planet]) will be spinning all night in between bands, to make sure there’s never a dull moment. You can still grab tickets here while they last, but we’re also doing a last minute contest, and giving away a pair of tickets plus a limited edition show poster to one lucky fan! Read on for more on why you CAN’T MISS THIS SHOW, and enter below!

Additionally, PUP and the promoters have teamed up with Five Points Pizza to offer two special promotions. On Friday, June 17, you can get a free download card for single “DVP” with the purchase of a PUP-peroni slice OR a “DVP” combo (Drink + Veggie slice + PUP-peroni slice). Then, on Saturday, June 18 after the show, anyone with a ticket stub will get a free PUPperoni slice from 11 p.m. – 3 a.m. at the Five Points takeout window. What’s better than pizza and punk, right?

Canadian indie punks PUP are one of the best, most exciting acts to emerge from the scene in recent memory, their eponymous, self-titled 2014 debut serving as an explosive and acclaimed start to what is shaping up to be an exciting career, and ranking among that year’s best releases. Ever since they first popped on our radar, we’ve been obsessing over the Toronto outfit’s knack for merging abrasive, raw punk energy with earnest, emotional relatability, and after a raucous show at The End a couple years back, plus an outing at last summer’s Warped Tour, we’ve been eagerly anticipating their Music City return. Their brilliant, recently-released sophomore LP, The Dream Is Over, has deservedly managed to transcend the punk scene, nabbing attention from the likes of NPR, Beats 1’s Zane Lowe, Pitchfork, Rolling Stone, and several other unlikely outlets, and has been ranked alongside high-profile releases from Radiohead, Beyonce, Kanye West, and Chance the Rapper as one of 2016’s best albums. The Juno nominated rockers are on a rare and undeniable career trajectory towards crossover success without compromising their punk integrity, and if you’re a fan of smart, substantive, unadulterated indie punk, you’ll want to get familiar with them immediately; or, better yet, come see them in person!

West Virginia’s Rozwell Kid have been a buzzworthy fixture in the underground pop punk, indie, and power pop scene for several years running. Boasting a sound reminiscent of early Weezer, but with a fuzzy, modern twist, the group’s last album, Too Shabby, was one of the most criminally underrated records of 2014, and their 2015 EP, Good Graphics, dropped as part of Infinity Cat’s cassette series last summer. With plenty of Nashville ties and a fantastic stage show to boot, if you missed the bandwagon when we’ve told you about this band in the past, it’s time to get onboard!

Like PUP, Pkew Pkew Pkew hail from Canada, and, while they certainly share some of the same pop-accessible indie punk sensibilities, their sound is actually more similar to that of some local favorites: Diarrhea Planet. Formed through Craigslist a few years back, the group dropped their debut, Glory Days, in 2013, and have been honing their sound on the road ever since, sharing the stage with groups like FIDLAR, Titus Andronicus, and DP. Their brand new self-titled, sophomore LP packs even more energy and riffage, making these party punks one of the most promising up and coming bands to keep an eye on. We’ve heard that their live show is epic, so show up early and see for yourself!

Winner will be announced Saturday, June 18 at 11 a.m. CDT, and will receive one pair of tickets. Good luck!