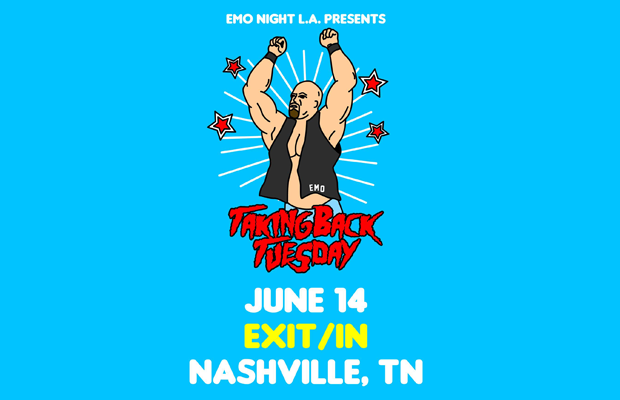 While we could argue all day about the proper usage of the term “emo,” it has, for all intents and purposes, come to be a blanket term for much of the pop punk, indie rock, post-hardcore, pop rock, and, well emo, of the ’90s and especially the ’00s, when the scene bands ruled the charts, Warped Tour was king, and the coolest kids all shopped at Hot Topic. If you’re a millennial, there’s a good chance you know and (secretly or not so secretly) love the scene we’re talking about, but maybe you have some friends too cool to admit the same, or who never got into it. Lucky for you, emo is having a renaissance, and one of the most fun, nostalgic ways to connect with likeminded fans is by letting loose and getting nostalgic at an emo night dance party. The most famous one of all, Taking Back Tuesday is leaving its home base of LA to host events around the country, and they’ll be bringing the fun to Nashville for the first time tonight, June 14 at Exit/In! Tickets are still available right here, so grab yours now, and read on for more about the party and tonight’s special guests!

The recent surge in popularity of emo-themed DJ nights (which, themselves, are a reflection of emo’s overall popular resurgence in general) can largely be attributed to one single event: Emo Night LA a.k.a. Taking Back Tuesday (not to be confused with Taking Back Sunday, the band for which it’s named). Launched in the late 2014, the celebration of all things ’90s and ’00s emo, pop punk, post-hardcore, and indie takes place monthly at the Echoplex, and, thanks to an abundance of interest that has driven their attendance to more than 2,500 people a night, the party recently expanded to adjacent room The Echo, adding live music and additional happenings. Founded by three friends with likeminded taste, Babs Szabo, T.J. Petracca and Morgan Freed, the party has been heralded by numerous mainstream press outlets, frequented by celebrities, and has featured guest DJs from bands like Blink-182, All Time Low, The Wonder Years, FIDLAR, My Chemical Romance, Motion City Soundtrack, and more, along with acoustic performances from acts such as Dashboard Confessional, The Used, and The Movielife. For its first ever tour, Taking Back Tuesday seeks to recreate the fun in venues around the country, and Nashville’s installment, strictly a DJ night, promises to bring the best of the nostalgic jams you grew up with, provided you grew up listening to Saves the Day, Brand New, New Found Glory, Sunny Day Real Estate, Death Cab for Cutie, Fall Out Boy, Paramore, and, of course Taking Back Sunday. The slate of guest DJs for Music City include local transplants Anthony Raneri of Bayside and members of Cartel. Nashville has become something of an emo band retirement community as well (you can thank the cheap rent and abundance of songwriting and production gigs), so don’t be too surprised if you see some of your favorite emo musicians there in the flesh too! Check out a mini-documentary from our buds at Alt Press below, to keep a feel for what’s in store!