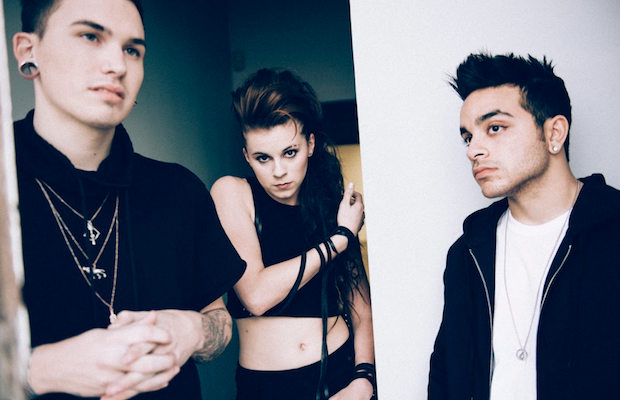 Following a breakout year thanks to the sleeper success of their debut LP, White Noise, buzzy Massachusetts rockers PVRIS (that’s pronounced “Paris”) are set to play their largest headlining Nashville show to date tonight, May 11 at Cannery Ballroom with scene favorites Lydia and exciting up and comers CRUISR and Beach Weather. A must-see show for fans of electro-fused, dark, moody alt-rock (plus more pop-geared indie rock in regards to the openers), tickets can still be had for $22 right here! Read on for more about the lineup, and don’t miss this show!

Thanks to their unbelievably strong 2014 debut LP White Noise, buzzworthy Massachusetts alt rock/dark electro-pop trio PVRIS have, over the last couple of years, ascended from a tiny touring entity (they’ve played plenty of Nashville dives and DIY spots in the past) to a certifiable, mainstream rock juggernaut, earning critical praise and radio buzz, and nabbing appearances at high profile festivals and on the late night TV circuit. PVRIS just re-releaseed White Noise last month in a deluxe edition, and are navigating 2016 poised to become one of the biggest new acts in rock. An absolute live juggernaut, propelled by the immense talent of frontwoman Lynn Gunn, PVRIS are a band you must see live to fully appreciate. Formed only in 2012, the young trio are likely to soon leapfrog the alt/punk scene, and graduate to the mainstream echelon, so far following a similar career trajectory to breakout acts like Paramore and twenty one pilots. An absolute band you need to know, catch PVRIS tonight to see what all of the hype is about. You won’t be disappointed.

Arizona indie rockers Lydia have been around for over a decade, finding their first taste of breakthrough success with 2008 sophomore LP Illuminate (arguably still a fan favorite). Despite numerous lineup shakeups and even a brief hiatus, the band, anchored by frontman and founding member Leighton Antelman, are still going strong, celebrating a prolific string of releases over the past few years, which have reenergized the band and helped them find a new fanbase. Their ambient, indie, pop accessible sound has always made them something of an odd man out in the punk scene they usually associate with, but their sensibilities make them a perfect match for PVRIS.

Perhaps the poppiest act on the bill, Philadelphia’s CRUISR, initially conceived as a solo vehicle for frontman Andy States, but since evolved into a full band, have, so far, released just two EPs, but based on their strength alone, are generating plenty of well-deserved buzz. More akin to acts like The 1975 and Youth Lagoon, the group’s energetic, pop-accessible, indie rock sound has earned them spots on a plethora of big festivals, and, ahead of a full-length debut, they’re already lighting up the blogosphere.

Fronted by ex-A Rocket to the Moon mastermind Nick Santino, newcomers Beach Weather sprung up out of nowhere last year, with a debut EP called What a Drag, and a supporting slot on a tour with Santino’s long-time cohorts The Maine. Certainly giving CRUISR a run for their money in the pop department, the band’s driving, pleasant, personal, upbeat sound should serve as a perfect way to get this show started!