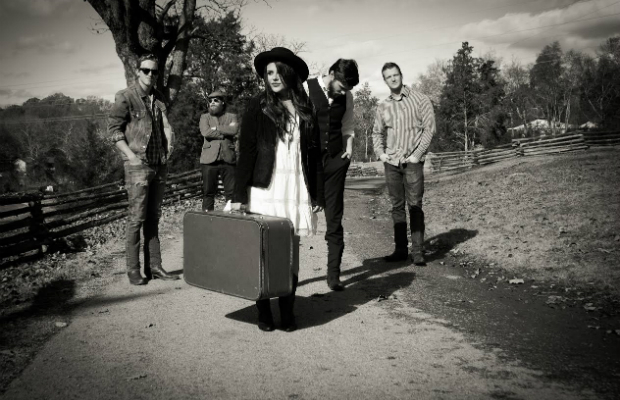 Local Americana folk outfit Roanoke has been buzzing the internet in anticipation of their debut self titled full length which is set to drop on May 13.  The single “Heavy Goodbyes” garnered sincere acclaim from The Bluegrass Situation, while the lead single, “Jordan,” pinged fans of country leaning site, The Boot.  Now, we are thrilled to jump into the mix, and provide some hometown love with a full album stream ahead of the official release date.

Roanoke is led by songwriters Joey Beesley and Taylor Dupuis, who weave together beautiful, yet relatable, songs of love and the journey of life.  Their soaring harmonies will provide immediate appeal to fans of bands like The Civil Wars, The Lumineers, or The Head and the Heart, and their backing band (Zach Nowak, Kyle Breese, and Jo Cleary) sounds just as tight as a group of grizzled, road weary musicians throughout the album.

We asked the band about their formation, and how they found their sound.  They told us, “Something we have all shared from the very beginning is a love for roots instrumentation and a broken heart string over the stories told in Folk and Americana music. After moving to Nashville, immersing ourselves into the local music scene, hanging out at The Station Inn on Sunday for bluegrass jam, and constantly rotating influential artists like: Jason Isbell, The Lumineers, Emmylou Harris, Willie Nelson, Trampled By Turtles, Sturgill Simpson, The Head and The Heart, Fleetwood Mac, and The Civil Wars on our turntable. [We] can honestly say that finding our sound happened pretty organically. Roanoke has a special place in all of our hearts as it is our introduction into the world, It’s our best foot forward and our shot in the dark. We’ve worked countless hours on this record, poured our hearts into this record, relocated and grown together because of this record, and we are all a family because of this record. It means so much to all of us to finally have a way to include listeners on our journey, which is only just beginning.”

With one listen to Roanoke below, we’re pretty convinced that you will feel the well constructed bridge that spans Americana, pop, and country in the impressive record, and, if you are like us, you’ll have an eye on what is lining up to be a very successful debut from the talented new Nashville group.