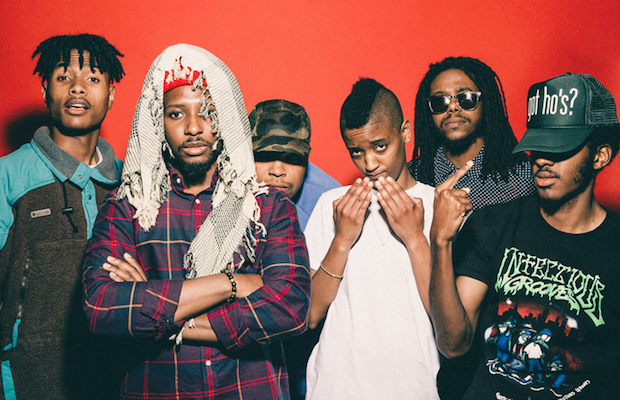 Though perhaps best known for their associations with Odd Future, neo soul group The Internet are quickly forging their own identity and cementing their own legacy as a diverse, interesting, and thoroughly modern musical entity. The band’s genesis can be traced back to 2008, when core duo Syd the Kid, a Los Angeles native, and Matt Martians, a burgeoning Atlanta producer four years her senior, met on MySpace. Martians soon relocated to LA, and the pair honed their fresh, self-taught production skills by contributing to hip hop collective turned superstar incubator, Odd Future (most of OF’s early music was recorded in Syd’s home studio). Dubbed “The Internet” in a joke that managed to stick, the pair released their first album, Purple Naked Ladies, the inaugural offering from Odd Future Records, in 2011, before soon expanding to a full band, at first live, and now permanently, to flesh out their complex and organic sound.

The Internet’s story is inextricably linked to Odd Future’s, but, over the last few years, they’ve mostly drifted apart, Syd going so far as to formally announce her departure from the collective, despite their overall inactivity (she mostly served as a producer and DJ for the band, and has been subject to some controversy, as an openly gay member of a group often criticized for perceived homophobic lyrical content). With The Internet, she assumed not only a production and songwriting role, but stepped front and center as a vocalist and thematic architect, complimented by Martains’ unparalleled ear for composition and c0-production. The duo managed to further expand their sound and generate increased buzz with 2013’s Feel Good, but it was last year’s breakout third effort, Ego Death, which helped propel The Internet to broader mainstream critical and commercial success, landing on multiple best of lists and scoring countless summer festival spots at events like Bonnaroo. Blending hip hop sensibilities and personal, socially aware lyrics with elements of r&b, funk, and electronica, all realized live with a full band, The Internet are one of the hottest rising acts in soul music today, and Odd Future connection aside, they deserve to be lauded on their own merit.