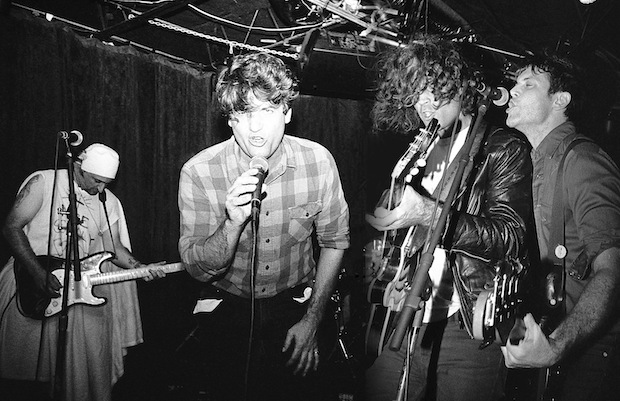 If you haven’t yet seen the Americana-punks Justin & the Cosmics after all the raving we’ve done about them both before and after the recent release of their record Schooly Dreams, then you need to spend your Friday at the new arts space Meal Ticket on 1030 3rd Ave S. It won’t take you long to see why they’re one of the most unique bands in both Nashville and the extremely popular Americana-rock genre. Both their album and their live show manage to be simultaneously hilarious and heartbreaking, as frontman Justin Collins performs a satire of the moody rebel lead singer while also effortlessly embodying the archetype. Opening are some new faces you should also get to know, the heavy blues duo Black Venus, ’60s rock-influenced group Charlie & the Evil Mothers, and newcomers Kneel Jung.

Justin Collins is also known for his work with the Black Lips/Deer Tick supergroup Diamond Rugs, and his production duties with the local outfit Cosmic Thug he runs with the band’s guitarist Adam Landry. Justin & the Cosmics’ music could be called Americana-rock, but more in the vain of Dylan’s loopy “Basement Tapes” sessions rather than most of anything that was scheduled for AmericanaFest last year. There’s also early punk, country, rockabilly, and Dylan during his early electric years in their sound, while Collins takes a piss out of and inhabits the image of the all-American badass male artist.

Black Venus are a heavy blues duo that take their name from Baudelaire’s favorite mistress, the Haitian prostitute who inspired his book Les Fleurs du Mal (The Flowers of Evil), and later killed the poet with a dose of syphilis. The band takes traditional Delta blues slide guitar riffs and puts them into lower tunings with lots of volume and fuzz, making for a harder, more evil blues sound. Black Venus recently released their first EP of bluesy trashers, titled Blackheart.

Kneel Jung are new, so we don’t know much about them yet, but they clearly have a sense of humor so you should get to the show early and check them out.

Justin & the Cosmics, Black Venus, Charlie & the Evil Mothers and Kneel Jung will perform Friday, March 11 at Meal Ticket (1030 3rd Ave S). The show is 18+, begins at 9 p.m., and tickets are available at the door for $5. The venue is a DIY arts collective, which means BYOB.