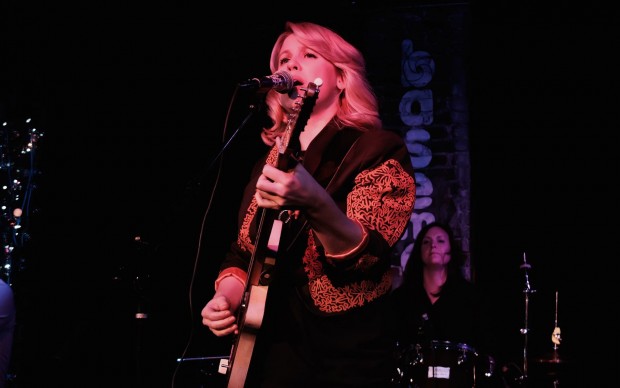 Over the weekend, noir alt-country singer Pony Boy celebrated the release of her debut full-length, Blue Gold, at The Basement with the record’s producers Justin Collins and Adam Landry, who are both in the group Justin & the Cosmics, and second generation singer-songwriter Lilly Hiatt. Pony Boy came on the scene last year with her EP The Devil in Me, which, along with its captivating videos, exhibited her unique voice and old-Hollywood-meets-southwestern-cowboy aesthetic. Now, she’s fully realizing that vision with a complete record. Pony Boy is definitely one of the coolest new artists on the alt-country scene in terms of both sound and style, and we were happy to be there to catch her record release show. Read on for our full review and photos. 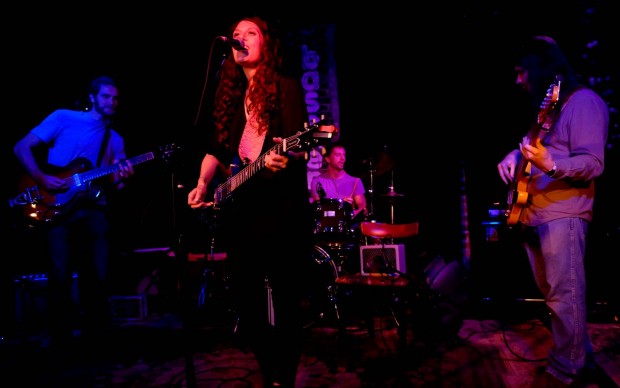 Singer-songwriter Lilly Hiatt opened the evening with her ’80s and ’90s alternative influenced version of the singer-songwriter genre. Her music could have been strummed on an acoustic guitar with no backing band, but when your father is eccentric songwriting legend John Hiatt, which she addresses on the song “Somebody’s Daughter,” it’s understandable to want to do something different with your own songwriting career. Like Pony Boy, Hiatt also worked with Adam Landry on her latest record. He helped her bring out a more confessional, alternative rock feel, playing on influences like the Breeders and Pearl Jam, a far cry from her father’s traditional singer-songwriter sound, though she says she does still get advice from him on the craft of songwriting. Her mix of country inflections and road weary songwriter attitude over fuzzy guitars was a little reminiscent of Lucinda Williams. 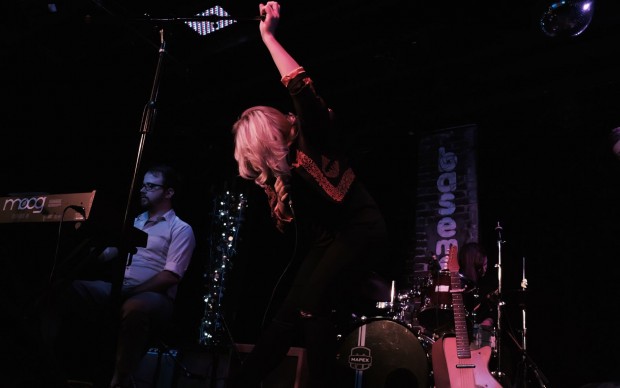 Pony Boy is the stage name of Marchelle Brandanini, taken from the lead character of The Outsiders. She looks like a Hollywood starlet who dresses like a tough cowboy and sings a slow burning mix of country and ’60s rock. Her low, throaty vibrato has sung everything from opera to punk in her past musical projects, and is well-suited to her current country-soul-songwriter endeavor. “The Devil In Me” was an older song from last year’s EP and still one of her best tracks from the evening, a deceptively hopeful sounding song about the hidden evil within.  The lead single from Blue Gold “Marquee Man” — which you can listen to here — was another highlight and possibly the least country-sounding tune, a creepy, lilting noir rock tale about an actor whose enormous ego does him in. Producer Justin Collins came onstage to join Brandanini in the classic country duet homage “Too Tired,” and she ended the set by inviting a bunch of friends onstage to cover Bob Dylan’s “It’s All Over Now, Baby Blue.”

The alt-country scene in Nashville is very saturated, but in terms of style and substance, Pony Boy brings enough talent and individuality to the table to set herself apart. Founding Cosmic Thug Records with Adam Landry (who has already worked with Deer Tick among others) and Justin Collins (frequent collaborator with Diamond Rugs) won’t hurt her cause either, as other musicians looking to get a similar vintage sound as Pony Boy or the next band, Justin & the Cosmics, will start hitting this small label up in droves. 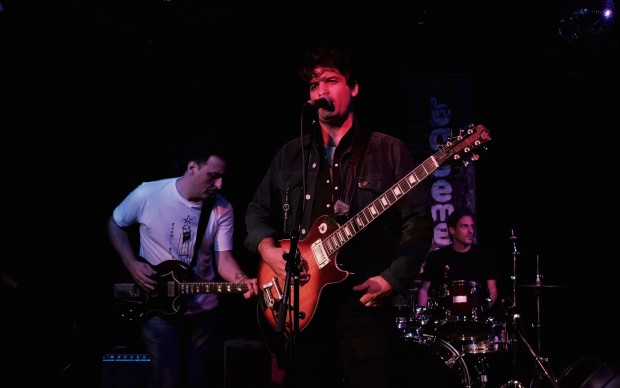 Everything about Justin & the Cosmics frontman Justin Collins felt like an anachronism, from the way he dressed to the way he talked and sang, in a way that was certainly affected but didn’t feel fake, which made it instantly easy to see why Nashville artists are so eager to work with him as a producer. Collins has worked with the Black Lips supergroup Diamond Rugs frequently, and Justin & the Cosmics had one of the most talked-about EP releases of last year. They’ve been threatening a record release for a while, and within the first 30 seconds of the opening song I could see why the Scene and other publications have been complaining about why that record isn’t out yet.

If you want to see a real punk band, not some indie band that calls themselves that because they use fuzz pedals and wear Converse, then Justin & the Cosmics is the band you need to see. There’s the Clash, the Modern Lovers, and even that original punk, Elvis, all in their sound. Collins is a sneering amalgam of, like, every early American male badass; Johnny Cash, James Dean, Elvis, and Dylan are all there. His voice was gritty and snotty and at moments drifted into southern rockabilly inflections. If you’re looking for the great punk-influenced rock and roll in Nashville, this band was smarter, were better performers, and more authentic than all the groups of children hardly old enough to drink that constantly get buzz as the best “punk” groups in town.